I received an email from Developer Express today letting me know that they’ve released a new version of their Refactor! Pro tool for Visual Studio.

I’ve been using their free version since Visual Studio 2005 was released, and while it doesn’t get a mention in the email or on their general product versions page, they have released a new version of the free product too.

I’ll be interested to see if this fixed the annoying “feature” where the wireless card spontaneously turns itself on - a great way to shorten the battery life.

Update: This update refuses to install via my Vista machine. I’ll try it at home on the WinXP box to see if it is happier. I had a small panic until I read the readme.txt file which said if the upgrade fails, just pull the battery out and restart it - phew! 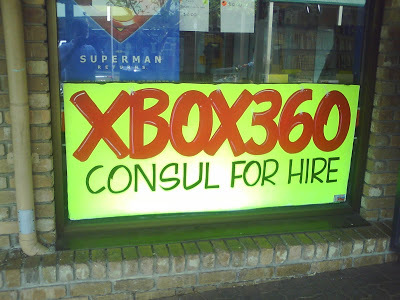 I saw this sign out the front of the local video shop a few weeks ago, and last weekend remembered to take a photo of it!. It’s a bit surprising, as I would have thought you would pick ‘console’ before ‘consul’ as the more well-known/spelled word. I suppose they do have those ‘alternate world’ games to which you might want to have diplomatic relations!

I’m back at work after two weeks leave over the Christmas/New Year’s break. Not too many emails to sort through, and not too many problems to fix so far.

It’s been the one big uncertainty about running Vista 64-bit - having to tread very carefully for the last month or two without that extra safety net.

I also got access to the RTM of Office 2007 Enterprise Edition just before I went on leave, so it’s nice to be running the release version of Office 2007 now.