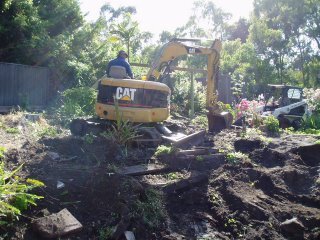 Work began this morning on our house extension. We only just got home from our holiday to Sydney on Friday night, so it hasn’t really been a relaxing few days before returning to work tomorrow!

The keynote was quite good, but I think the best session was Dave Glover’s overview of ASP.NET 2.0 - probably the most relevant to me too.

The other highlight (apart from all the freebies from the vendors’ expo) was chatting to Joel Pobar. While he wasn’t presenting today, it was good to let him know how excellent his talk at this year’s CodeCampOz was. I’m pleased to hear he’ll be back again next year. He also had some interesting things to say about what it is like working at Microsoft in Redmond, and some of the challenges he is working on for the next version of .NET (eg. Concurrency and Versioning).

As you may know, because I’m currently visiting Sydney instead of being in Adelaide, I’m attending the Sydney events for the Visual Studio 2005 Launch.

Not personally knowing anyone at an event is a bit strange when you are used to always knowing someone when you go somewhere in Adelaide. However I did get to meet and chat with Rob Caron, who’s blog I happen to read regularly, so that was a nice highlight.

I also chatted with some nice Microsoft people, and got a few nice freebies (haven’t tried on the T-shirt yet, normally XL is my preference).

Tomorrow the formal day-long launch is in at the Sydney Hilton in the city, so that should be interesting. I’ll catch the train in, so a bit easier than having to drive across Sydney traffic.

I was reviewing some ASP.NET 1.1 code last night using Visual Studio 2005, making use of the Code Analysis (fxCop) tools that are built in.

I noticed some of the .aspx pages had hyperlinks with a leading tilde (~), which I’d never noticed before.

Turns out, this make the link relative to the application root, which is something that I suspect I could have made use of before now.

While not documented for 1.1, it is in the ASP.NET 2.0 documentation now, as well as referenced in quite a few articles on the web.