(For my own reference)

To resolve this issue in Microsoft SQL Server (often observed when you restore a database that came from another server):

alter authorization on database::[MyDbName] to sa;

In September last year I took part in the MVA ‘Become a hero’ promotion. By signing up, I got a free t-shirt (and if you know me well, you’ll know that makes perfect sense). In addition by completing a number of online courses from the MVA site, you could then get a novelty figurine (or maybe up to 6 if you did more courses).

I received my t-shirt, but my figurine never arrived. It appeared the super powers of “DevOps Captain Code” also included the ability to get lost in the mail. “Oh well, at least I’ve got a t-shirt”, I thought.

But then yesterday I got home to discover two packages from Microsoft. One was another t-shirt (yay), and the other was the full set of 6 figurines.

So now we have (left to right)

They’re now gracing my desk at work, much to the bemusement of my colleagues

Figurines and t-shirts aside, if you’re after some quality free online training then there’s some excellent resources at the Microsoft Virtual Academy site. Most courses are run as a live event and then are made available on-demand a few weeks later (useful if the live event clashes with your preferred time to be asleep!)

It’s summer time. We’ve had a bit of hot weather, including today (and more to come in the next week), but also some cooler patches too, which I think the garden has appreciated.

On hot days when it gets into the high 30’s and 40’s, I’ve taken to putting out shade for some of the smaller fruit trees. Bits of shade cloth and old sheets. The garden probably looks a bit like a weird art installation, but I think the trees appreciate a bit of help surviving the blistering heat.

I’ve harvested some cabbages (there’s still a few growing), and got some tomatoes just starting to fruit. I was a bit late planting these – my dad is already eating the fruit from his. I had planted some cucumbers and pumpkins but only two plants survived and they’re not really flourishing. I think I should try and get things started earlier next season.

There’s some corn that’s getting ready to flower, so hopefully we’ll have some corn cobs down the track.

We’ve got two apple trees that were planted almost 5 years ago. The ‘pink lady’ has fruited for the last couple of years, but this season is the first that we’ve had fruit set on the ‘gala’. Not sure if it just took a while to get ready, or if I pruned the wrong bits in winter previously. 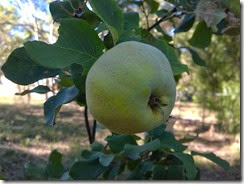 Narelle planted a Quince tree behind our back fence a just over a year ago. It’s got some fruit growing on it, which hopefully will ripen as we approach winter

I’ve installed the Windows 10 preview build on my laptop, and one side-effect of this is that I can’t get the Windows Phone 7.1 SDK bits to work (they won’t install). Hopefully they will be supported eventually in later (or the final) versions of Windows 10, but for now it means I can’t do any 7.1 builds of my phone apps using my laptop.

I thought it would be interesting to find out how many 7.1 users are still downloading the app, to gauge whether I should still try and support the older devices. I took a look at the download data for one of my apps (Aussie Toilets) for the last 3 months: 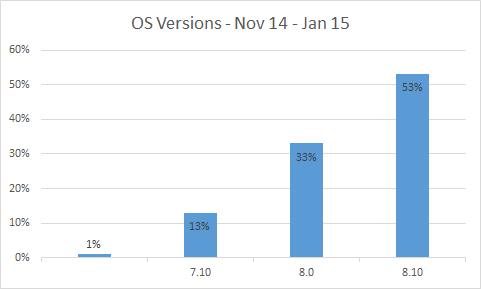 What about handset manufacturers? No surprises there – Nokia with 90%. 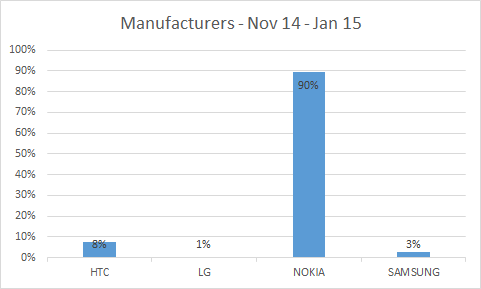 And the same for country/region – Australia with 89%. I assume the other countries were just curious, international travellers or possibly even immigrants who preferred their original country’s settings. 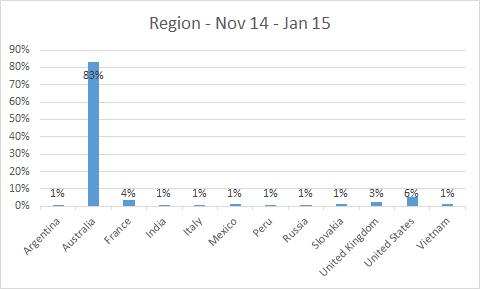 And finally just out of interest, age groups: 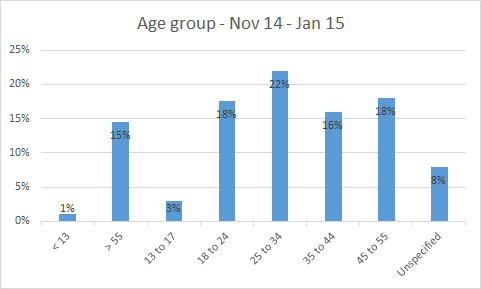 That’s a nice even spread across the various age groups.

So that might mean that for now I’ll have to leave the 7.1 users high and dry. If support for installing the old SDK is fixed, then I can look at giving them a few more updates in the future. Alternatively I might be able to convert my old system image into a VHD file and then I can boot the laptop back into the old Windows 8.1 image. I’d have to trim down the VHD file so it can fit onto the 500GB SSD I’ve got in my laptop though (that may not be that easy as the original image that’s still sitting on the old non-SSD drive was also 500GB).

The other messy part is that you can’t easily develop within a single version of Visual Studio for Windows Phone 7.1, 8 and 8.1. Visual Studio 2012 was the last to support 7.1 and also supported 8.0. Visual Studio 2013 can do 8.0 and 8.1 and Universal Apps (sharing code with desktop Windows). 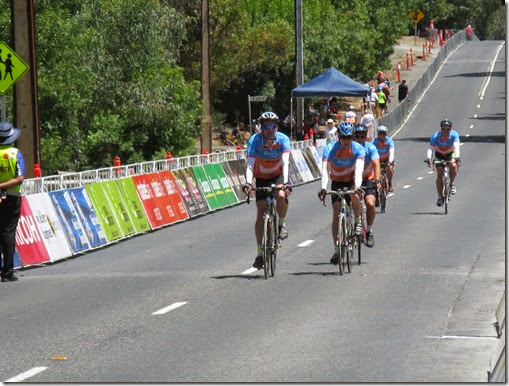 Yesterday, I took part in the BUPA Challenge Tour ride, part of the 2015 Tour Down Under. I rode with my Dad and Philip – all as part of the Mud, Sweat and Gears bike club. We followed the same route that the professionals would take later in the day. Apparently around 6,500 cyclist took part – some like us doing the full distance, others choosing to do shorter distances by starting at a number of locations along the route.

The official route started at Glenelg, but to save riding down to Glenelg and then back the same way, we started from the bottom of the Southern Expressway. We then headed south down the Expressway (a route not unfamiliar as the veloway parallels this) and then through Old Noarlunga, back onto Main South Road then past Aldinga to Sellicks Hill.

Sellicks Hill was designated as the “King of the Mountain” section for the professionals, but it really was just a gentle incline.

Further along, after nearing Myponga, we veered off back towards Mt Compass. Just before Mt Compass it was great to have my in-laws Rick & Margaret cheering us on (they’re a regular fixture every year to see us during the ride and at the finish line). Passing through Mt Compass, we travelled a few kms before stopping for food and refreshments at Nangkita.

Back on the bikes, through Ashbourne, Strathalbyn, Macclesfield and then another drink stop at Meadows. No time to stop at the bakery unfortunately!

The final leg through Echunga and finishing at Mt Barker

Here’s a summary of my ride captured by the Endomondo app on my phone. (Note that the distance/time includes travelling from my home, but I’ve edited out that part from the map).

As you can see, we don’t set a blistering pace

- 20km/h is about our average. Those sharp dips on the bottom graph’s green line correspond to our rest stops. The grey line on that graph shows the elevation.

I think this year I had one of my better preparations for the ride. I’d been able to get in some regular rides to work and got out most Saturday mornings in the last few months. Whilst glad to finish, I felt in reasonable shape at the end. The weather certainly helped – it was very mild for most of the morning, and we even had a bit of drizzle as we passed through Sellicks Hill. It was only in the last hour and a bit that the clouds parted and the sun made itself felt.

The tour organisers did a great job. Lots of drink stops and well provisioned food stops. No complaints there. 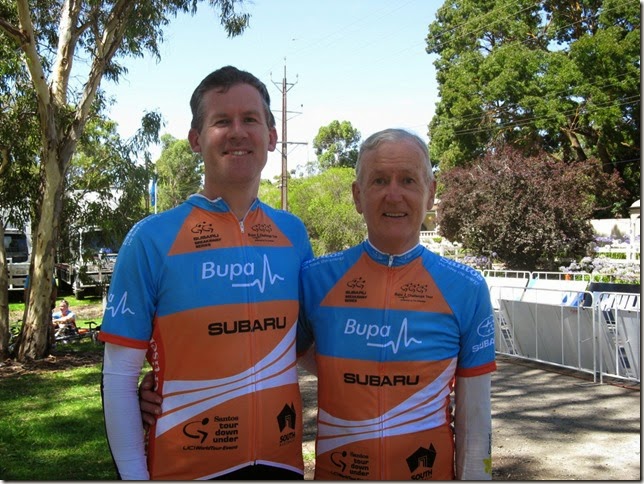 Here’s my Dad and I after the race – please ignore the helmet hair! It was a good day and a great ride.