Anyone who works with SQL Server (including the database engine, integration services, reporting services and/or analysis services) should be aware of PASS – the Professional Association for SQL Server.

PASS run a number of events throughout the year. The largest of these is the annual summit, held in Seattle. This is widely regarded as the place to hear the world’s best speakers on all things SQL Server related. It’s no surprise that my old boss Rob is one of them!

If you can’t get to Seattle then there’s other options, one being the free “24 hours of PASS” online training days*. These are virtual events run through LiveMeeting, but depending on your local time zone if you don’t feel like staying up into the wee hours, watching the recordings might be a better option.

First of all, if you haven’t done so already, register as a PASS member (it’s free). You’ll then be able to attend the next 24 Hours of Pass (Sep 7-8), and also watch recordings of previous presentations.

Recordings are available as either a LiveMeeting presentation, or WMV streaming video. Watching these offline on my phone required a few extra steps: First off, the WMV files are published using MMS:// to support streaming. This does make it difficult to save locally. I discovered that you can also access the same file using HTTP:// so that solved that issue.

Normally you can copy a WMV file onto your Windows Phone by selecting the file in Zune to sync with your phone. There must be something about the PASS videos that Zune didn’t like, as it came up with an error C00D11CD (C00D1189). The suggestion for this is to re-encode your video.

So I fired up Windows Live Movie Maker, loaded the original WMV file, then saved the movie using the "Windows Phone" mobile device settings. The new file copied successfully onto my Windows Phone!

So if you see a guy on a bus commuting in Adelaide watching the occasional SQL Server video (to complement his regular collection of podcasts), chances are it could be me

If you use one of the default Windows Phone settings in Movie Maker, you’ll end up wasting a lot of bandwidth – the videos are pretty much

There's been a few changes for me over the last couple of days...

On Saturday the basketball team I coach won their first game ever! These are young kids, most of whom are playing in their first season. They've been improving every week, but up until now we've found that we've struggled against the opposition. More often than not, the 'mercy rule' comes into play. When we are 10 points behind, the other team has to run back to their key, so at least we can dribble the ball down the court before they steal it and score again

But not yesterday! With the help of a fill-in player everything fell into place. Our shots were dropping, passes were being caught and before I knew it I had to do something I'd never expected I'd need to do – I called a timeout to tell my players that *we* were 10 points in front and that we now needed to run back to let the other team have a go.

It was a great feeling and so satisfying to see the surprised but happy faces of the kids.

The other big change for me was that Friday was my last day at LobsterPot Solutions. It's been great to watch LobsterPot grow from when I became Rob's first full-time employee to where it is now – as Adelaide (and now Melbourne's) preeminent SQL Server and Business Intelligence consultancy.

So what's next? I've decided to accept an offer to join MatrixGroup, and I'm looking forward to the new challenges this will present.

When I told my kids, they responded with "You're going to work for the Magic Tricks Group?"

Which allows me to indulge in my love of the Muppets by closing with a quote from The Amazing Mumford..

(which always seemed a very odd thing to have on your sandwiches until I learned that jelly was American for jam.. but then to me that's still an odd combination to have on a sandwich!)

On Saturday we had our first DDD Adelaide conference, and I came away feeling very satisfied that I'd heard some great presentations and high hopes that this event can grow bigger and better next year.

There were nine presentations squeezed into the day...

Introduction to iPhone/iPad development using Objective-C. Lama Chandrasena gave an overview of creating apps for iOS devices. Looking at the Objective-C samples made me glad I get to write WP7 apps in C#

Cross Mono, cross platform for a Windows .Net developer. Cristian Prieto gave a good overview of the features and benefits of the Mono toolset and libraries. Even if you aren't wanting to do cross-platform .NET applications, there are still some useful bits of Mono that you can use for your Windows deployments too.

Case Study: Design Patterns for a Row Versioned Data Warehouse in SQL 2008 R2. Jeremy Huppatz gave an interesting presentation on some of the challenges he faced in developing a data warehouse for one of his clients.

Easy Web Deployment – Begin the Enjoyment. Despite his laptop not being very obliging, Malcolm Sheridan spoke about the various tools available to ease deployment of web applications and SQL databases. I've used a lot of these myself, so could identify with many of the points Malcolm made.

Kinect. This talk didn't even have an abstract when it was up for selection, and yet just the title was enough for people to vote it into the conference. Lewis Benge gave a thought-provoking talk and demonstration of using the just-released Kinect for Windows SDK. 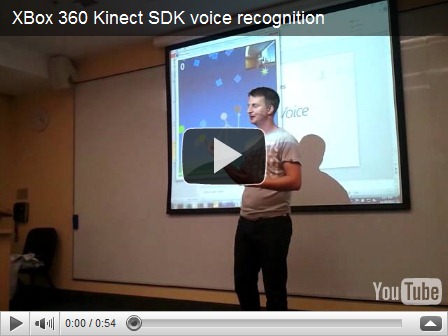 This is the only video I took of the day. The funny bit at the end is when the stick figure 'explodes', as Lewis walks out of the view of the Kinect sensor

Looking behind the curtain of jQuery. Jared Wyles knows his JavaScript and jQuery inside out. By the end of Jared's talk I was left in no doubt of this! Some good tips on improving your JavaScript performance too.

Beyond Branding. Paul Turner spoke about branding SharePoint sites. I didn't realise you could use PowerPoint to create a theme for SharePoint 2010. Would have been nice if Paul could have been around for longer than just his talk.

Joins, SARGability and the Evils of Residualiciousness. If you want someone to wrap up a conference with what can sometimes be the most difficult slot of the day (eg. the last one), then look no further than Rob Farley. What Jared is to JavaScript, Rob is to T-SQL. Some great pointers on understanding SQL Server query execution plans and realising that sometimes there's more than meets the eye to an execution plan that on the surface may appear to be optimal.

A few of us headed over to Marcellina's for a nice pizza and good conversation to finish off the evening.

Thanks to Peter Griffith for organisation, Lewis Benge for the free lanyards, laptop covers and magazines, and other interstate speakers for their support.

I was really pleased with the turnout. I'd have to check with Peter but I think the attendance was one of (if not) the best we've had for these kinds of events. We're smaller compared to Sydney or Melbourne but I'd love to see this build up so that we can run at least two tracks next year. That would be pretty tricky to do all on our own, but if we can work with the other state's DDD events then I think it will be possible for us to benefit from things being organised at a more national level.

DDD Adelaide 2011–The votes are in, registration is open

Just in case you missed the news, voting has closed and the the sessions as voted by you are now listed on the DDD Adelaide site.

Now we just need you to register to let us know that you'll be there on July 16th. While you're at it, please spread the word with your colleagues. We want as many people there as possible!

Register via EventBrite or ACS, and I'll see you there!

The session proposals are in and listed on the DDD Adelaide website.

It's now up to prospective attendees to vote for their favourite sessions, so we end up with the topics you want to see!

Review the sessions, and then vote via the survey now!!!

Voting closes midnight 23rd June (attendee registration will be available from the 24th).