Mark from Mats Systems emailed me last week to say that the components had come in! So I promptly popped by the shop on Saturday to pick up my order.

I’d spent a fair bit of time using Static Ice to research the best prices for all the bits, but in the end I decided the convenience of a local retailer won out against the added freight costs of ordering from interstate (even though the interstate vendors’ retail prices might be initially cheaper).

I’d previously bought an LG Blu Ray/DVD drive and GS8400 video card from MSY, and the remaining components were ordered through MATS. 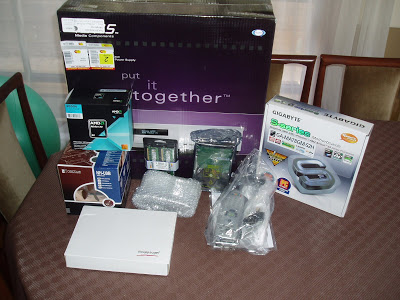 After unpacking all of the various bits, I decided the first thing to tackle was the Noctua NH-U9B heatsink for the CPU. The motherboard (a GA-MA78GM-S2H) comes with a standard AMD cradle, so I removed that using my very useful “bent nose” pliers to pop out the plastic anchors (Narelle bought the pliers for me years ago, and at the time I wondered what they were, but it turns out they’ve been one of the most useful tools in my toolbox!). I then installed the replacement cradle for the Noctua heatsink in the motherboard. 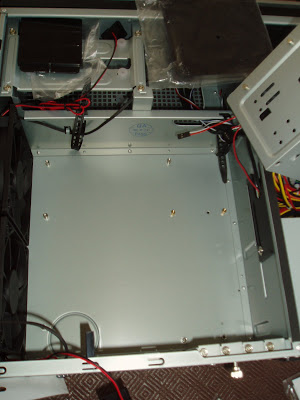 I then lined up the motherboard and screwed in the two extra brass stand offs into the floor of the case. 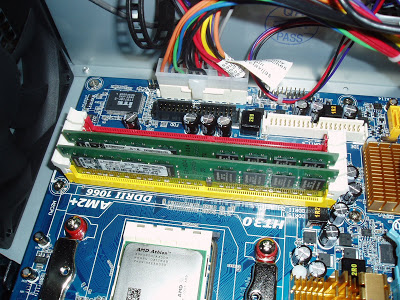 I then laid the motherboard in the case and screwed it down.

This is when I made my first mistake.. When holding the motherboard to lower it down, one of my hands was grabbing the conveniently located gold-coloured heatsink (between the CPU and the PCI-Express slots). As I did this, I heard a “crack” and the heatsink suddenly felt loose. “Oh no! What have I done?!”

Fortunately it was easily repaired with some heatsink cement that I’d bought last year following a similar incident. 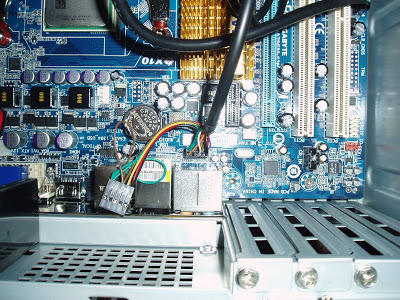 In went the RAM, and the cables for the 1394, VFD USB and Audio (initially I had the “HD Audio” connected, but later I swapped over to the PC’97). 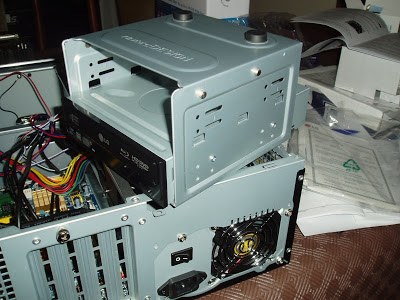 I then took the Blu-Ray drive out and mounted that in the external media caddy. I’ll admit it took me a couple of goes to figure out the right way to align the drive in the caddy. When it is located correctly, the case’s silver eject button pushes against the drive eject button. 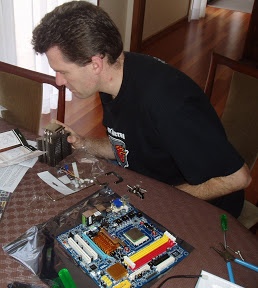 Maybe now would be a good time to complete installing the Noctua heatsink. In trying to figure out the best alignment for the sink, I placed it on top of the CPU, and then realised I had a bigger problem… It was too tall! 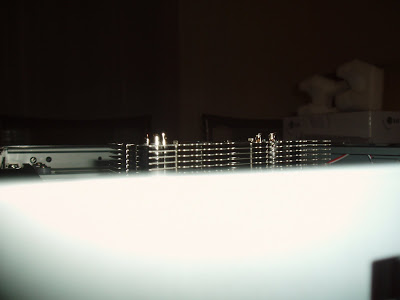 As you can see from the photo above, the heatsink is clearly visible poking above the top of the case. There’s no way the lid is going to fit on with that installed! Looks like the Noctua (with a height of 125mm) is not suitable for this case. My original specs actually referred to a Scythe Ninja Mini, which at 115mm probably would squeeze in ok. In the meantime, I decide to revert back to the AMD heatsink and fan that came bundled with the CPU. 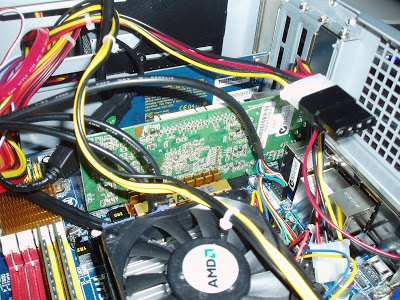 I then went to insert the Hauppauge HVR-2200 Tuner card and realised something wasn’t quite right. It’s a PCI-Express 1x card, but that heatsink I had to fix up was in the way. Hmm…. I wonder if maybe when I reattached it, it was put in backwards? Checking the photo on Gigabyte’s product page for the GA-MA78GM-S2H confirmed my mistake. That was quickly rectified and then the tuner card fitted in nicely. 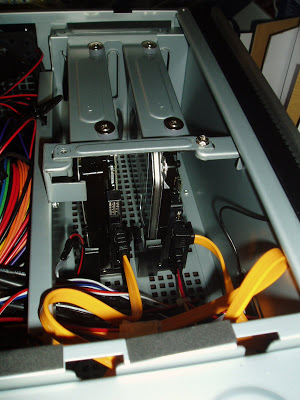 Next I installed the hard disks into the disk holder. That was straight forward, except that I realised I only had one “4-pin Molex to SATA power” adapter cable. For the moment I was going to be restricted to using one disk at a time.

That seemed to be all of the essential components installed, so I plugged in the mains power cord and fired up the machine.

Only to be greeted by deafening silence. 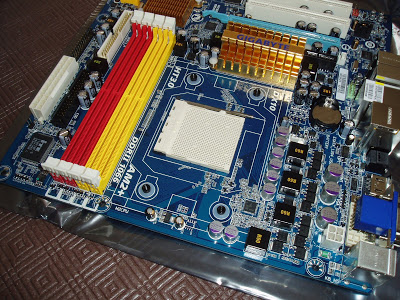 Hmm, what had I got wrong? I reviewed all the wiring and it looked ok. I then noticed that there was an empty square socket on the motherboard the looked suspiciously like it would be a perfect fit for one of the unused plugs from the power supply. Strange, I thought I’d already plugged in the power for the motherboard. Checking the motherboard manual (page 23) confirmed my error - that’s the power supply for the CPU! (You can see it in this photo - it’s the white cube-shaped socket in the bottom right-hand corner of the photo). I plugged in that cable, tried the On button again, and this time success!

The machine booted up, but when it got to scanning for local disks, it took ages to decide there weren’t any. Coincidentally, I also noticed that the Seagate drive was making funny beeping noises.

I played around with the BIOS settings, swapping from IDE, to SATA, to AHCI, but nothing seemed to fix the problem that the drive wasn’t being found. No matter, I thought I’d try installing Vista anyway - maybe the drive would appear then. No such luck. Vista confirmed that it too couldn’t see any drives. About this time, I also updated the BIOS from F3 to F5 - (the latest as of a few weeks ago).

Very odd. A quick Google of the symptoms revealed others have had similar problems with the Seagate drives, so in the interests of testing the system out, I swapped the power over to the Western Digital drive. The difference was obvious - the drive was found by the BIOS immediately.

About that time I had to go out, so rather than let the Vista install complete, I just shut down the machine. Probably not a good move, as the next time I started it up, I was greeted by an obscure “Bootldr is missing” message.

The strange thing is that even when I tried to boot from the Vista DVD, the message still appeared. It was like the BIOS was checking the hard-disk even though I’d told it to try the CD first. Very odd. In the end, in desperation I disconnected the SATA cable from the drive and rebooted. This time, with no hard-disk to confuse it, the BIOS offered to boot from the CD again, and I was able to start the Vista installation process again. Once this was underway, I reconnected the SATA connector again.

Vista then displayed the drive in its list and allowed me to reformat it. However presumably because Vista thought this drive was now “removable”, it refused to allow me to install on it. No matter, I just rebooted at this point, and was able to repeat the process again, this time without the “Bootldr is missing” message causing problems. I finished the Vista install, but as it was done on the WD drive, I didn’t activate it, knowing that I eventually intend to use the replacement Seagate drive for as the system disk.

So after those minor speed bumps, I finished installing Vista Ultimate and drivers for the various components. I then fired up Media Center in Vista and it worked like a dream. It located all the digital TV channels we have in Adelaide, and was able to display the TV in living colour. At this stage, I was using one of my computer monitors, but the next step was to try out the Composite TV-out socket to see if we’d be able to hook this thing up to our ancient CRT TV.

Much to the bemusement of Narelle, I took the system down to the room where the TV lives, and proceed to hook it up to the VCR. Sadly, after a few goes with various settings, I resigned myself to the fact that it just wasn’t going to work. For some reason, while the VCR can happily receive composite video from our existing DVD player, it doesn’t like the output from the 8400GS NVidia-based card. I plugged the VCR back in and Narelle was able to watch her programme again, instead of a frustratingly-blank screen.

My final attempt to get this to work will be to try one of the RF Modulators from Jaycar, but I’m pretty pessimistic about the chances of success. Assuming that fails to work, then I think it’s “get a new TV” time.

The only other news is that Mark from Mats Systems confirmed the Seagate drive is a dud and is replacing it. I also got a full refund for the Noctua heatsink, as I was able to return it in mint condition in its original packaging. I think it would be a great heatsink, just not for this size case! He also supplied me with an extra Molex to SATA converter, for when the replacement drive comes in.

In conclusion, all I need is the replacement drive and to sort out the TV situation and I think we’re up and running. For my first “build from scratch” computer, I’m pretty pleased with the result :-)