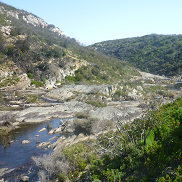 My ISP (Internode) provides a number of unmetered streaming radio stations for its customers. A while back I’d followed some instructions on how to set up shortcuts in Media Center to link to some of these stations. This worked pretty well, until the ISP reorganised their server and all of the shortcuts broke. I thought it would be an interesting exercise to write a simple Media Center application that could grab the current radio list from the published radio stream RSS feed, list those stations in Media Center and allow selecting a station and getting Media Center to start playing it.

Now you can start Visual Studio and you’ll see a new project template in the C# language section. There’s a few more things I needed to update to get everything working properly:

Then it’s just a matter of getting up to speed with the intricacies of Media Center application writing!

The source code for the application (InternodeRadioMCE) is published on Google Code. It is very rough at the moment. As I get more familiar with the Media Center programming model I hope to improve it a bit!

And the photo? It’s of Rocky River (courtesy of our recent holiday to Kangaroo Island) – and the closest thing I could think of to a stream (as in streaming radio!)