It was a very early start for me Tuesday morning, waking up at 4:15am in order to get to the airport for the 6am flight to Coolangatta via Sydney. (A big thanks to my brother-in-law David, who also got up early to give me a lift!)

The flights went smoothly. We were a bit delayed landing in Sydney, so I was in a rush to get to my connecting flight. It was a relief to discover that it was the same plane, so no risk of missing it or losing my luggage

I caught the Gold Coast Tourist Shuttle from the airport to my hotel – probably half the price of a taxi and just as convenient. 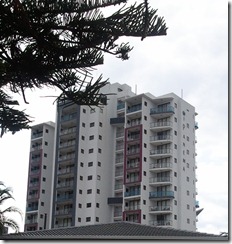 I'm staying at Ipanema Holiday Resort. At about 1.2km, it's the furthest I've been from the convention centre, but its a pleasant 10 minute walk so that's fine. Plus, as I'm paying for this trip myself, the price fitted my budget.

After registration, I had a "Technical Learning Guide" briefing meeting. It was good to see quite a few familiar faces from last year.

Something new this year was the addition of two "Kick-off" sessions preceding the keynote. I attended the "Developer Kick-Off", which included some highlights on Windows Phone, Visual Studio v.Next and Azure (specifically GreenButton's Pixar in the cloud service). 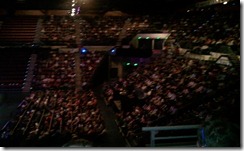 The keynote was probably one of the better ones I have seen. It was hosted by Adam Spencer (ABC TV personality and pure math fan), who was great, and I'm only glad he didn't try and show us all the digits of the largest known prime number. He was joined by Jarod Green (creator of the Beached Az cartoons) and Jane Cockburn (Senior Product Manager at Cochlear)

I did think it was ironic that there were so many mentions from the keynote speakers of developing software, when in reality the 'developer' portion of TechEd has seemed to be sidelined in the last few years by the organisers. 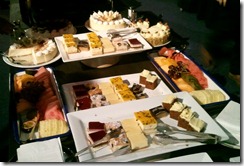 Following the keynote was a welcome reception, which provided some nice food for tea and my opportunity to grab a JetBrains Resharper T-Shirt.

About this time, the skies opened and The Gold Coast experienced a nice little tropical downpour, complete with lightning. I'm glad I'd brought my sprayjacket for the brisk, if slightly moist, walk back to the hotel room.

A phone call to the family to talk to Narelle and the kids, then a bit of work before turning in for the night.