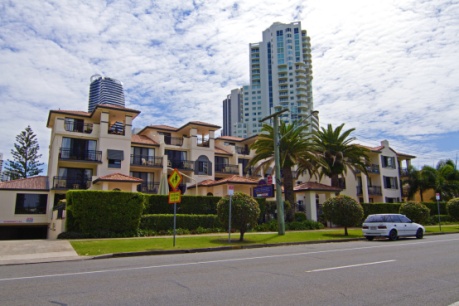 A few weeks late, but I’ve finally got around to writing about this year’s Microsoft TechEd conference held in September. Tuesday morning, Narelle and I flew up to Brisbane then caught the train down to the Gold Coast.

This year I’d booked accommodation at Island Beach Resort, quite close to the convention centre. It might have ‘Resort’ in the name, but it’s really just some nice apartments.

After checking in, I headed down to the convention centre for registration and then the Technical Learning Guide orientation meeting. Unfortunately this was at the same time as the the first “kick off” session. The meeting was useful as there was a different company organising the hands-on labs this year.

The keynote welcome included some interesting Kinect-inspired performance art, and then a talk (and videos) from Jason Silva. Jason was a very intense presenter – much the same as in his videos. I did like his positive attitude towards the future. His talk was very fast-paced and full-on, such that I think I’m still chewing over the things he said (even a week later).

I happened to see him again as one of the guests on ABC-TV’s QandA program about a week after TechEd. To my surprise he said almost exactly the same things, word for word. Not quite as impressed after that.