As I write this, a major bushfire is threatening towns and some suburbs in the north eastern areas of the Adelaide Hills. 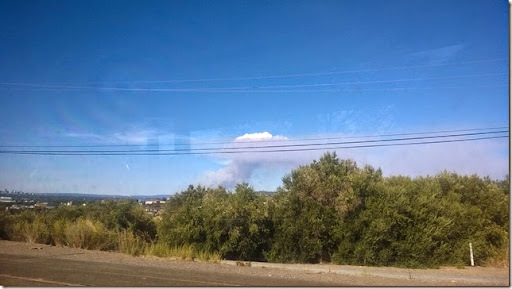 Here’s a photo I took on my bus ride home from work on Friday, looking north. You can just see the edge of the CBD on the left of the horizon. The smoke is towering up into the sky. Friday was very hot – it got to 44°C (~111°F). This morning (Saturday) when we woke up, the smoke had drifted south and was obvious in the air around our house.

Fortunately I live a fair way away from the fire front, but that doesn’t mean I’m not thinking about our preparations should we be put in a similar situation. Given where we live, it’s a real possibility every fire season.

So, that’s an interesting start to 2015, but what about last year?

I’ve been involved with the SQL User Group since it started many years ago. The Adelaide .NET User Group (ADNUG) has been running even longer, but for most of that time the evening meeting time wasn’t that convenient. That changed earlier this year when I decided I wanted to take my user group involvement up a notch, by not only becoming a regular attendee at the ADNUG meetings but also stepping up to help organise them too.

I’m now charged with organising speakers for each month. Speaking of which, this month we’ve lined up Sayed Hashimi to speak to us live from Redmond (Washington, USA) on changes coming to the ASP.NET 5 project system – register now! If the live hook-up works well then we might plan these regularly – possibly alternating each month between in-person and virtual. It could be a way to book some more well-known US (or other overseas) speakers.

A big change in 2014, with me leaving Eka at the end of September. I was feeling quite unsettled and was really not sure what the future held for me there, so I thought if I could take the initiative then I would, and applied for a position as a software developer at RL Solutions. It was a great start, and to be honest I’m really, really enjoying working with my new colleagues. In particular, I love the ‘team’ and ‘fun’ focus. I commented to the local guys when I began that unlike the Toronto office, we didn’t have a table tennis table in Adelaide. I’m pleased to report that oversight was remedied just before Christmas – just in time for us to be thoroughly ‘wiped off the court’ by our visiting CEO 😀

I was doing a lot of PowerShell earlier in the year, particularly in managing build servers and automating deployments. I’m still a PowerShell enthusiast, though those particular areas are no longer ones I need to worry about so much at the moment.

I managed to get one new app out this year, but felt like I just didn’t have any spare time to devote to pushing out some upgrades to some of my other apps. I hope that gets rectified in 2015.

I’ve been running Windows 10 preview on my laptop with not too many dramas. I’m looking forward to seeing it progress through this year. I’m curious as to what changes will come to Windows Phone from this.

Wow, what big changes are happening for Microsoft and .NET. Who would have thought open source would be having such a big impact and become part of their culture like it has? It feels like the ‘new guard’ at Microsoft, particularly in the developer division have really started to have an impact in this area.

One constant frustration with working at MatrixGroup/Eka was the lack of change facilities for those of us who like to ride our bike to work. I was very pleased to confirm that my new place of employment does provide both bike storage and shower facilities.

I’ve signed up to do the Bupa Challenge Tour ride (part of the Tour Down Under) on January 23rd.. Hmm, that’s only 20 days away! So it’s been great to be able to put in some rides to work as well as a few Saturday morning rides with the Mud, Sweat & Gears guys and girls.

Changing jobs feels like a big stress has gone. That is good. I’m still not sleeping well though, and am booked in to have a ‘sleep study’ later this month. I’m hopeful that might provide some clues and a way forward to not feeling tired most days.

Close friends and colleagues know that my family seem to have a few health issues that we have to struggle with. I don’t expect 2015 will be dramatically different. Put it this way – I realised that I now am reasonably confident navigating my way around the local Emergency Department (which otherwise resembles a rabbit warren) now that I’ve had to visit there quite a few times.

Looking ahead, other things to get done include getting an aquarium up and going (still deciding if we go for fish, or maybe a turtle). There’s also a chook shed that needs to be finished. The kids have already given names to our future chooks (you might sense a theme):

Our oldest will start his last year of Primary School, so selecting a High School will also be on the agenda (we’ve already been doing some research towards this).

So there’s some of the things that stood out for 2014 and a few things coming up for 2015. I’m sure I’ve missed something!

What were your significant events for 2014 and what are you looking forward to in 2015?