It’s summer time. We’ve had a bit of hot weather, including today (and more to come in the next week), but also some cooler patches too, which I think the garden has appreciated.

On hot days when it gets into the high 30’s and 40’s, I’ve taken to putting out shade for some of the smaller fruit trees. Bits of shade cloth and old sheets. The garden probably looks a bit like a weird art installation, but I think the trees appreciate a bit of help surviving the blistering heat.

I’ve harvested some cabbages (there’s still a few growing), and got some tomatoes just starting to fruit. I was a bit late planting these – my dad is already eating the fruit from his. I had planted some cucumbers and pumpkins but only two plants survived and they’re not really flourishing. I think I should try and get things started earlier next season.

There’s some corn that’s getting ready to flower, so hopefully we’ll have some corn cobs down the track.

We’ve got two apple trees that were planted almost 5 years ago. The ‘pink lady’ has fruited for the last couple of years, but this season is the first that we’ve had fruit set on the ‘gala’. Not sure if it just took a while to get ready, or if I pruned the wrong bits in winter previously. 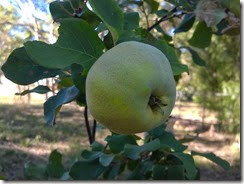 Narelle planted a Quince tree behind our back fence a just over a year ago. It’s got some fruit growing on it, which hopefully will ripen as we approach winter