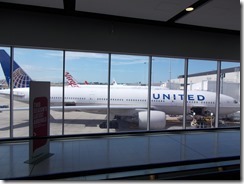 My trip to Canada and USA has begun. My alarm went of at the early time of 3.45am, left me enough time to get ready for my ride. My sister and brother-in-law very kindly offered to give me a lift to the airport. My sister is doing a travel agent course at the moment, so she’s been able to use me as a bit of a case study and look up my flight details, which has been fun. It was also nice that I got to give my youngest daughter a final hug goodbye as I managed to wake her up in my tromping around the house. Not sure if she went back to sleep, or made the most of being up before her big brother and sister.

I discovered when checking in at Adelaide that my bags would indeed be checked through to LAX. I wasn’t sure about this when booking. Also no dramas with carry-on bags. I was worried that my (quite old) laptop might push me over the weight limit.

I wish I could say my flight from Adelaide to Sydney was uneventful, but that would be ignoring the friendly, but slightly inebriated passenger who had trouble picking up his cup of hot coffee off of the tray being offered by the flight attendant, and promptly spilled it down my leg. A small scald mark on my shin – just glad it didn’t land in my lap. Spent the rest of the flight with cold compresses on the burn area, and it’s settling down a bit now.

Arriving at Sydney, then transferring to the international terminal. Wow, is that a crazy place. Managed to find the United desk (right up the other end from where we were dropped off), and sailed through check-in and the border control/security stuff. Got to my departure gate with time to spare, so was able to make a couple of calls home. 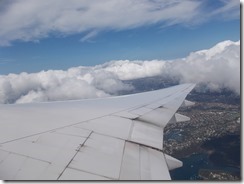 Boarding United Airlines was straight forward. I ended up in “Economy Plus’ somehow – not complaining! My sister again was able to do some digging and informed me that I was the only one booked in my three seats. That didn’t last, as another traveller decided he’d move to the seat across from me to share some of my elbow room. That’s ok, there’s still an empty seat in between.

I’d heard that some United planes didn’t have individual entertainment/tv consoles, but I’m pleased to find that I must have one of the more modern ones – my own screen on the seat in front, and there’s also power under the seat (and the other guy doesn’t seem to need to use it – bonus).

So now another 12 odd hours until we land at LAX (Los Angeles International Airport). I hope that goes as smoothly (if not with less coffee precipitation) as everything else has gone so far.