This is the first in a [series of posts]/2016/04/analysing-net-code-dependenciesoverview.html) on reviewing tools for analysing .NET code dependencies.

So let’s take NDepend v6 for a spin and see what it can do.

I’m going to use the Open Live Writer code base for these reviews. The writer.sln contains 28 projects and around 3,000 types.

The OLW solution is special in that most projects point to the same single output folder. As a result you might have to tell NDepend to look in this output directory rather than just relying on it to examine the solution’s projects. Once the assemblies are selected, the analysis begins.

Analysis might take a minute or two, but when it finishes you are prompted to view the results. I chose the Dashboard view: 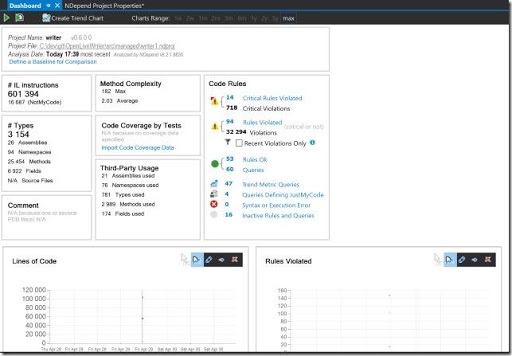 To dig into the dependencies, let’s look at some useful diagrams. First up, the Dependency Graph. Go to NDepend, Graph, View Application Assemblies Only.

By default, the size of each ‘node’ indicates the relative number of IL instructions in that assembly. From the graph above, it’s obvious that OpenLiveWriter.PostEditor is the largest assembly. That sounds reasonable given that OLW is all about editing posts.

Switching to the Matrix, here again is the ‘Application Assemblies Only’ view: 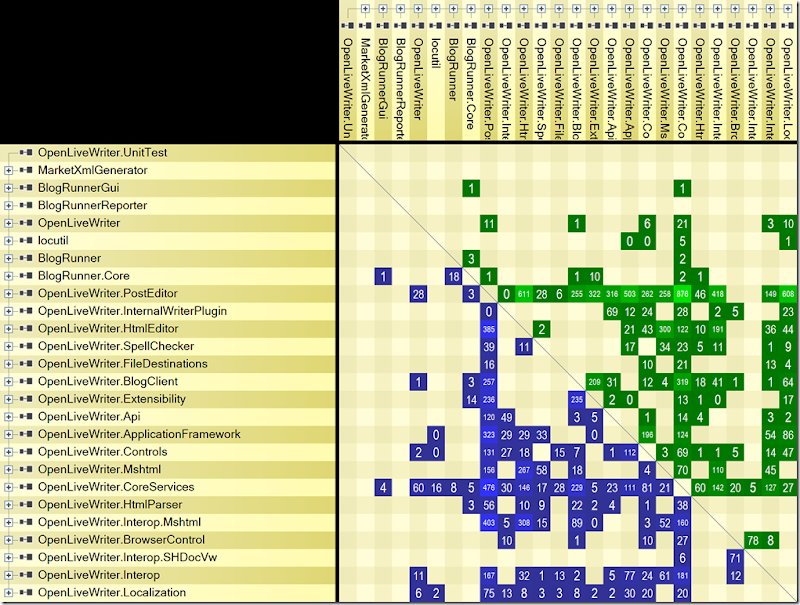 The intersections where there are 0 methods used from the assembly reference bear further investigation. Sometimes there might be a valid reason, but quite often this represents an unnecessary assembly reference that can be removed.

The query language is very powerful. I’d like to find assemblies that are only referenced by one other assembly. Matching assemblies could be candidates for merging with the parent assembly if there’s no good reason for keeping them separate.

I came up with this custom query:

Which returned the following results:

Are all referenced only by OpenLiveWriter.PostEditor. That’s useful to know.

Selecting the top item in the list opens the Queries and Rules Edit window, with the top half showing the actual query that was used to search for the violations and the bottom half showing a tree of matches for this rule (in this case it’s the offending methods). So that Init() method takes 15 parameters. Maybe that’s ok, maybe not. 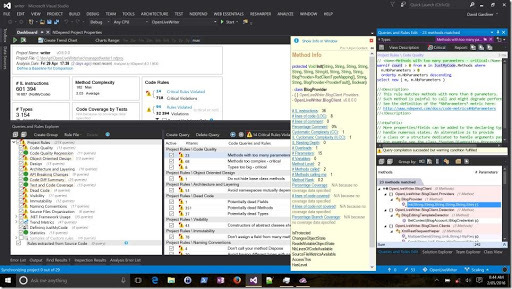 I love digging around the results of these kinds of rule queries. Particularly the ones around potential dead code, where you end up identifying and removing code that isn’t being used anymore.

NDepend has really progressed over the years. It’s particularly nice to see the improved integration with Visual Studio. Ideally every developer would have NDepend in their toolbox to use themselves, but a first step is probably including it as part of your build pipeline. That way, at least everyone can view the reports it generates as part of the build results.