Earlier this year I’d been contacted by Rachelle (Community Manager at Reinteractive) asking if I could promote a CodeRetreat Event that she was organising in Adelaide to ADNUG members. Not only was I was more than happy to do this, but I decided to go along myself and find out what it was all about.

The day-long event was held in the _southstart (formerly Majoran) office space in Grenfell St. 20 had registered, but somewhat disappointingly only 6 of us showed up (I say “somewhat” as in some ways having a smaller group actually worked better, and not just because there was more food to go around!)

The day was also facilitated by Adam Davies (who also helps run the Adelaide Ruby Meetup group). The structure of the day was based on the one from Coderetreat.org. After a welcome and introduction, we paired off with another attendee, worked on implementing Conway’s Game Of Life for around 40 minutes, then all came back together as a group for a ‘retrospective’ review and discussion of how we felt that session went. This was then repeated for most of the day, with a few challenges thrown in just to make it interesting, like “only commit code to version control when all tests pass, and use a 4 minute timer that you revert all uncommitted code when the timer expires” (that one was stressful!), “ping pong” (one person writes the test, and the other has to implement the code for the test) or “avoid using a mouse”.

Most of these sessions operated in pairs and promoted using test-driven development (writing the test first, confirm that the test fails, now write the smallest amount of code to make the test pass). I really do like the practises of pair programming and TDD, and it reminded me that it would be good to use these more in everyday work.

One rule of the day was “delete all your code at the end of each session”. It was curious how ‘wrong’ that felt. You are so used to saving and keeping stuff. It was probably a bit liberating too – after all while the code had gone, the experience and learning from the pairing session had not.

Even in such a small group there was a good mix of programming languages – Ruby, Java, JavaScript, C# (obviously) and even Elm. Sitting down with a fellow developer and working in an unfamiliar language was also both a challenge and a highlight.

Lunch was provided, and was a step up from the usual pizza fare. Very nice!

After lunch we did more of a ‘mob programming’ style session lead by another attendee Richie. Still using the Game of Life problem, it was a great illustration of how important communication skills are, as we worked through coming to consensus on not only how we could approach the problem, but what were good names for things and what did those names actually mean (not surprising, considering naming is one of the two hard things in computer science). 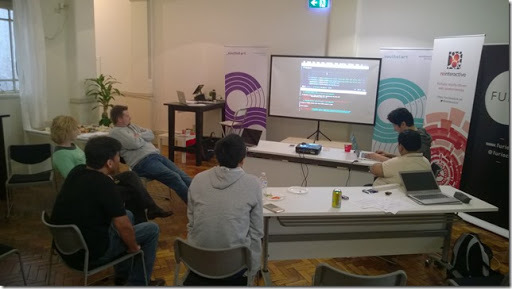 Following that we did one more pairing session. This time each pair got to choose from a list of limitations. My partner had commented when we sat down together how much he appreciated his mouse and that was probably what prompted me to suggest we try the “only use your keyboard” challenge. We used Java in Eclipse and apart from an annoying splash screen that we had to resort to the mouse to make go away, we managed the rest of the session to stick to just typing. Not easy though.

The day ended with a final group review. I really enjoyed the day, appreciated learning some new skills and practising some old ones, and getting to know a great bunch of people.