I’ve just returned from my second Microsoft MVP Summit held in Bellevue and Redmond, Washington (just outside Seattle). I had an awesome time!

I flew over on Saturday going via Brisbane and Vancouver. It was drizzly in Seattle when I arrived (not uncommon I know), but not so wet that I couldn’t spend a bit of time walking around downtown, getting a few souvenirs for the family and generally trying to stay awake as long as I could with the plan to try and go to sleep at right time. That wasn’t easy!

I’d stayed in Seattle the first night, but the summit was over at Bellevue and at Microsoft’s Redmond campus, so I caught the bus up there on Sunday.

I stayed at the Bellevue Hyatt, which was very nice (and convenient as that was also where registration and some of the off-campus events were being held).

Sunday afternoon there were some optional “pre-event” workshops that I attended.

Monday through Wednesday, I attended technical sessions hosted by the various Microsoft Product Teams at Redmond Campus. These started at 8am, so I was up bright and early to grab breakfast and jump on the shuttle buses to get from Bellevue to Redmond in time. 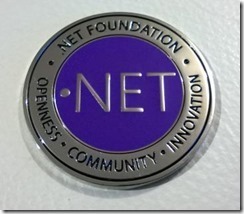 One unexpected surprise was to be one of a handful of MVPs to receive a special token of appreciation for contributing to open source projects connected to the .NET Foundation.

I believe some of the technical sessions were recorded with the intention that where they don’t cover NDA content they’ll be published to Channel 9. Also, you should watch out for the Microsoft Connect() event happening this week.

Thursday was a bit different. Still an 8am start, but for my area (Visual Studio and Development Technologies), Jeff Fritz (who had been coordinating the previous three days) organised a day-long hackathon.

I joined the Visual Studio Extensions group and worked on an extension code analyzer, which can check for common mistakes when creating an extension and offer code fixes. The idea for the analyzer came about after getting some advice on another of my extensions the previous night from Mads Kristensen (Microsoft Web Tooling and Visual Studio Extension author extraordinaire) and Justin Clareburt (expat Aussie and Senior Program Manager for Visual Studio Extensibility). You can see my progress on Github. After a little bit more polish, I hope to publish the analyzer to NuGet (and yes, I even spelled it with a ‘z’ 😀 )

Jeff tweeted about one of the other extensions produced at the hackathon, which integrates with the new Surface Dial. Very cool!

During the MVP Summit hackathon, Nico implemented a Visual Studio extension for the Surface Dial as a debugging tool https://t.co/P2NWS77WWH

Another highlight was going down to visit the Microsoft Store in the Bellevue shops and trying out the Surface Studio and having snowball fight with their HTC Vive Virtual Reality headset (photo taken by fellow MVP Alan Burchill).

Thursday night I headed home, arriving back Saturday afternoon. There were some tight connections, but staff at both Vancouver and Brisbane were able to ensure I (and my baggage) made my flights. Phew.

Special thanks to RL Solutions for supporting me attending the summit and especially for my family for allowing me to be away for the week.