I’ve had my Nokia Lumia 920 phone for just over three and a half years, and it’s starting to age. It has served me pretty well, but the screen is showing a distinct yellowing and more annoyingly if someone calls me, I need to switch to hands free mode for them to hear me. (Not always convenient if I’m in a public place like sitting on a bus!)

So I’d started thinking about what’s next. I’d already decided that as much as I love the Windows Phone interface, there’s only a limited future for those phones so a change of platform was due.

Initially I was looking at Android phones, in particular the Nexus models (figuring that they would be better supported and updated seeing as they come from Google). I was a bit concerned about a number of security vulnerabilities discovered in Android recently, and while iOS isn’t necessarily any more secure, I had been impressed with the stance Apple had taken with the FBI earlier this year. The other consideration was that the kids will all have iPads for school, so maybe iOS could make sense.

I didn’t want a huge phone, so something similar in size to the 920 would be nice. A friend recently bought an iPhone 6 and I’d helped her set it up, and I thought it looked pretty good.

So weighing all that up (combined with getting $140 store credit when I bought two iPads on Black Friday) an iPhone it is. I ended up going with an iPhone, opting for the latest iPhone 7 model.

I placed the order on Wednesday and went in to the Apple Store here in Adelaide first thing Thursday morning to pick it up. Turns out most of the people in the queue outside the shop were for service and repairs so I was in and out in about 5 minutes. A quick visit across the road to Vodafone to get a nano SIM and job done. Because of the new SIM card, it did mean I couldn’t wait until Christmas morning to open my new present! 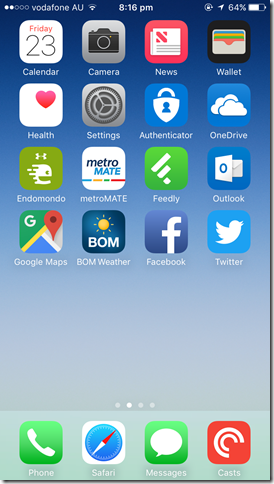 I already had an existing Apple ID, and it has a rather complex password. It’s quite a pain to have to enter into the phone repeatedly. I soon figured out that the fingerprint reader on the phone can be used instead of having to re-enter the password, but you need to enable that as it’s turned off by default.

Next stop was to install apps. A few favourites to match those I’d used on my Lumia and a few new ones to try out.

Paul Thurrott has written a couple of posts for people transitioning to iOS from Windows Phone. They are informative reading:

I used this on the Lumia, but frustratingly the Windows Phone version doesn’t have a backup/export option, so I’ll need to re-enter all my store cards. Maybe I can scan the barcodes off of the Windows Phone app directly into the iOS one?

A nice two-factor authentication app. Obviously I needed to manually transfer all my accounts over. One nice thing, I can now just ‘Approve’ when my Microsoft Account needs authentication. No idea why they couldn’t do that on Windows Phone.

I was able to export my data from this app on Windows Phone to OneDrive and import it into the iOS version. The only thing which doesn’t transfer is any photos of receipts.

It does cost $5.99, but a) it’s created by an Adelaide company and b) it has a lot of recommendations (including Thurrott), so I splashed out on this 😀. It can import OPML files. I had one lying around on OneDrive, though it wasn’t my current list as the default Windows Phone podcast app doesn’t support exporting OPML files. Not a big drama.

So that’s my new Christmas present! Any other app suggestions for me?