This week we hosted Jon Skeet at the Adelaide .NET User Group. Jon demonstrated some of the new language features coming in C# 8, and it was probably the biggest attendance we’ve had in a really, really long time.

Because we had so many registrations, I lined up some extra help with my two oldest kids (conveniently on school holidays). They helped set up the room, liaised with the pizza delivery guy, and helped pack up everything. I think they even found a few things familiar with Jon’s use of Fibonacci sequences in one example and similarity of programming language features (my eldest daughter has been doing some Python coding at school).

Jon lives in the UK, and we’re in Australia, so whilst we would have loved to have Jon in person, the next best thing was to have him present remotely. We’ve had remote presentations before using Google Hangouts, but this time I opted to use Skype (and made use of the new recording feature). I don’t use Skype a lot, but we got the call up and running without too much difficulty.

I set up a webcam in the meeting room, along with a boundary microphone (an MXL AC404 USB Conference Microphone). The intention is that the presenter can see the audience, and the boundary microphone allows people to comment and ask questions from a fair way away (eg. right at the back of the room) and still be heard. This seemed to work pretty well - people up the back were able to ask questions and Jon seemed to hear them ok. Jon’s video feed was pretty good. I think our feed back might have been a bit jumpy, but for the most part I think it was ok.

I left it to the last minute to arrange for access to the WiFi network at our venue. I ended up using my phone’s 4G data for the call, which worked well. It was only after we’d finished that I discovered that an email had come through just before the start of the meeting with the WiFi details. At least I’ve got them for next time.

We also picked up a meeting sponsor this month in Simon Cook from Encode Talent Management. Being able to not charge attendees (to cover the cost of pizza) was great, and hopefully this relationship might continue in the future. 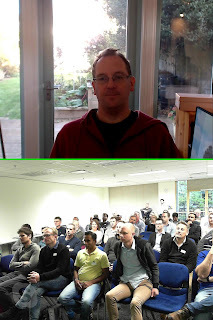 The recording of Jon’s talk is up on YouTube. I won’t be giving up my day job to become a YouTube broadcaster anytime soon, but it’s nice to have a record of a great presentation.