The Adelaide .NET User Group has been meeting in various incarnations since waaaaay back in 1993. The group has been through changes of name, venue and leadership, but 2020 and specifically COVID-19 has presented a new challenge to the continuity of the group.

Our last in-person meeting was in early March, and at that time COVID was in the news but there were no restrictions on public gatherings. I did however rush out to buy some hand sanitiser for people to use before eating their pizza. Concern was growing, and in fact that same day my friend and fellow MVP Rob decided to call off the Adelaide Data and Analytics User Group meeting that was scheduled for the following week. (By that weekend it had become clear that Rob was on the money).

April’s meeting had already been planned, but it had quickly become apparent that an in-person meeting would not possible. The choice was to either shut down the group for the duration, or find a way to go virtual. I was keen to explore the latter!

Our group (like Rob’s) had hosted remote presenters before (not everyone is lucky enough to visit Adelaide in person), but this would involve everyone being remote which was a big change.

I did a lot of research into viable platforms to run the meeting on - reading blog posts, comments on Twitter and listening and asking questions from my fellow Microsoft MVPs in the ANZ region. Zoom was popular in the community, but it was around that time that it was getting all the wrong kind of press. Microsoft Teams was a service that I was familiar with (having used it for work and also for the recent MVP Summit). The aspect of Teams that I decided to use for our first fully virtual meeting was Microsoft Teams Live Events.

What swayed me to choose Live Events was that it had a fully-anonymous option to run public events which I felt would lower the barrier to entry for participation. I have a complimentary Office 365 tenancy provided as part of being a Microsoft MVP, so I made use of this to host the event.

My presenter for April was Andrew Best (who also happens to be my co-organiser for DDD Adelaide). We scheduled a test run the week before to try out the technology and also involved Simon Cook to sit in the ‘audience’ seat. For the test we actually tried out Teams Live Events and Teams Meetings, and from that we felt comfortable choosing Live Events.

Our group has been using Meetup.com for a number of years now to promote our meetings. They recently introduced the ability to add a link to online meetings. The problem I discovered was that they’d limited the link field to 250 chars, and a Teams Live Event URL was around 270! Using a URL shortener didn’t work either (I tried) as they were parsing the text to limit it to a fixed list of virtual event providers. I reported this to Meetup.com and pleasingly they increased the field size a few days before our event. 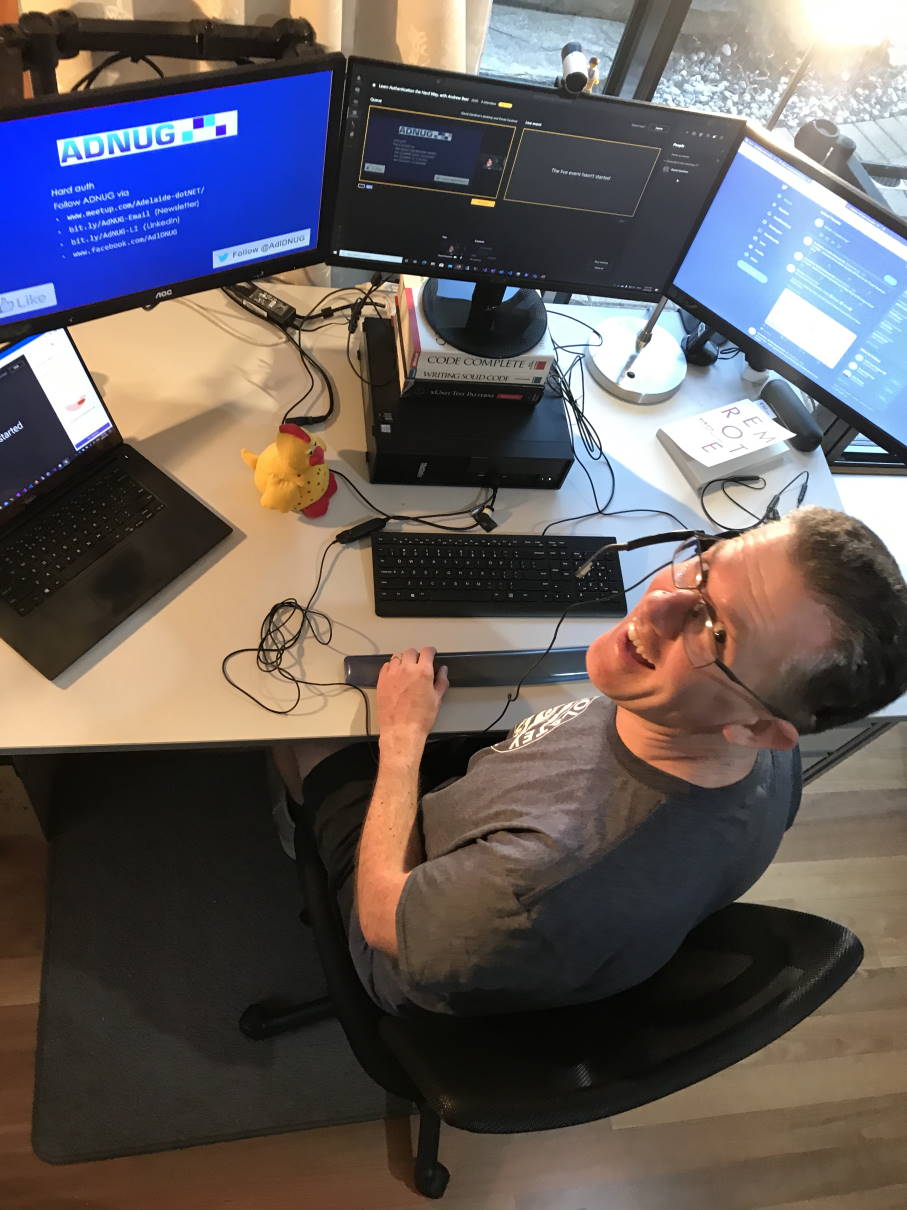 I was all set up (including bringing in some extra lighting) and 6pm was rapidly approaching. I then got a message from Andrew - he was having trouble connecting to the event! But we’d tested it the week before, what had changed? As it happens, Andrew had actually changed jobs in that week, and it seems Teams was trying to use his old credentials

Rebooting and restarting Teams wasn’t helping. Some frantic Googling came across this post, and applying the suggested solution unblocked Andrew. It did mean we started a little later than planned, but we didn’t have to cancel. To make sure attendees realised that we were running late, I’d hit the ‘Start’ button on the Live Event and then let everyone know to sit tight while we did some troubleshooting the problem (rather than think it wasn’t on). 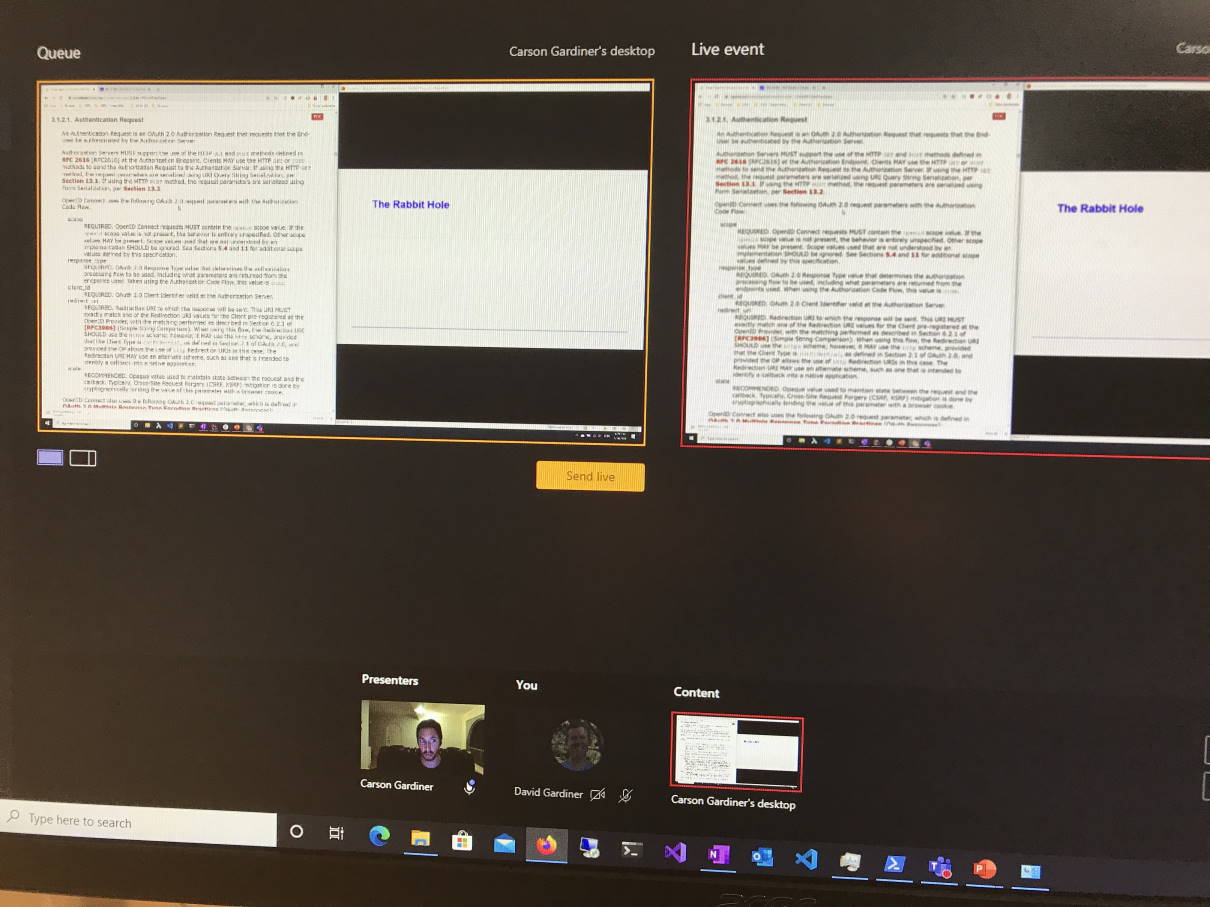 Once the introduction and updates were out the way, I handed over to Andrew to do his presentation. I was in the Producer seat, so I could choose whether to show Andrew’s screen-share, his webcam, or both. For most of the talk I left it on his screen, but as we were taking questions during the talk, I tried to switch to a screen+webcam view for those.

You can see in the photo above how you can queue up the next layout on the left. When you’re ready to change the live stream you click on the Send Live button. The layout options are very basic compared to something like OBS, but they did the job nicely.

While the event was on we seemed to peak at around 47 concurrent viewers. Afterwards I downloaded the event usage report which said we had 114 unique people connect in that day. I think the difference could be some people might have connected in via different devices (or app vs web browser), but still 114 sounds impressive!

The recording of the live event can be downloaded as an MPEG4 video file. My eldest daughter has access to Adobe’s Creative Cloud so I asked her if she could edit the video for me in Premiere (removing the big delay at the start). I uploaded two resulting videos to YouTube. The first was my ‘welcome, news and updates spiel’ that I normally do at the start of our events, the second was Andrew’s presentation.

The recordings are now published in the ADNUG YouTube channel:

What to watch out out for

We’ve already got our next meeting planned, and will use Live Events for that.

I’m also thinking of running some shorter lunchtime meetings, and might try using Teams Meetings for these to make them a bit more informal.

One of the recommendations from the ANZ MVPs was to get your group its own Office 365 tenancy (rather than rely on an employer’s or MVP’s). I’d like to get the group our own Office 365 Business Essentials subscription.

EDITED TO ADD (21st April 2020): Office 365 Business Essentials includes Teams Meetings, but does not include Live Events. It looks like you’ll need at least an Enterprise E1 license for that.