Ashford Hospital have a scheme called “Baby Bliss” where you can transfer to the Adelaide Hilton and finish your hospital stay there. They provide a midwife onsite, but it’s only suitable for mothers and babies that are doing really well and don’t require other medical attention. We found out on Saturday that the Doctors were happy for us to take this up, so that night the five of us spent our first night together as a family. The older kids enjoyed the experience - watching the trams and the fountain in Victoria Square from our room, Chinese takeaway and breakfast at the Pancake Kitchen. Narelle particularly enjoyed the room service (which is included for the mother). 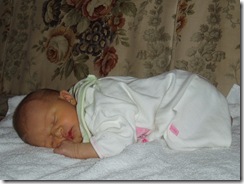 Monday morning Narelle and Amelia were able to come home. Narelle is recovering quickly and Amelia is feeding and sleeping really well. She’s also doing the other thing that babies do a lot of as well :-)

I don’t plan to blog anymore about Amelia at this stage. I prefer to be cautious about publishing details of our kids online (I know there are people out there that would misuse this information). When they’re old enough I’ll let our kids make that choice themselves.

I’m extremely proud to announce the birth of our third child - Amelia Jane Gardiner. She was born yesterday morning at Ashford Hospital, weighing in at respectable 7lb 4oz (in the old money).

Narelle and Amelia are both doing very well. 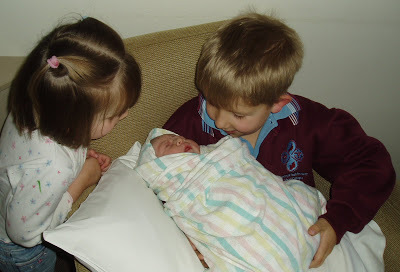 Back before ADO.NET, we used good old ADO to do our data access in our ASP pages. To improve performance and avoid SQL injection attacks, it is good practice to use parameterised queries or stored procedures. Usually these are interchangeable but I’ve noticed today that ADO throws up the following error if you try and set up a return value parameter:

For example, the following code gives that error:

I haven’t found any solution, other than to use a stored procedure instead. Presumably return values aren’t supported for plain parameterised queries, though I haven’t seen that documented anywhere (yet).

For a while now I’ve been using the Sync Kolab extension for Mozilla Thunderbird to synchronise changes to the Thunderbird Address Book.

This works quite well, but it only synchronises with other Thunderbird sessions. What I really wanted was to use the Contacts from GMail and synchronise with that. That way, whether I’m using Thunderbird, or just the GMail web interface, I’ll have the same details available for all the people in my contacts list. The problem is that Google hadn’t provided an API for accessing the Contacts data, but that all changed last month.

The good news is that Zindus are already working on a new extension for Thunderbird to synchronise with Google Contacts. I plan to try this out very soon.

There’s also support for the Contacts API in Google’s .NET Client Library, should you wish to use this in a .NET application.

Talking with my DECS colleagues this morning, the question of renderer support arose. Specifically will 2008 natively render reports as a Word document? (I understand that to do this previously, you needed to purchase 3rd party addins)

Turns out the answer is “Yes!”. As of the February 2008 CTP, the following renderings are supported:

More details of the new features (grouped by CTP release) are published on the SQL Server 2008 TechNet site.