I discovered this morning that there are no buses or trains that go to the city early on Sunday mornings. Thankfully my wife was able to drive me in instead!

ORM overview. A pity this wasn't before my LINQ talk yesterday, but hopefully it helped people understand the theory behind mapping objects to relational data.

Overview of features in Windows Mobile 6. Dave made use of Pocket Controller in his demo. He also mentioned using CompressSoapExtension to compress data with SharpZipLib going through web service calls.

A good presentation on the sales process, and how important it is that your web site is found by Google. I now have a better idea about "organic" (aka 'Free') search and "Paid" (aka AdWords) search.

Peter pointed out that for quick changes and campaigns, paid search is the way to go, as Google will display your new ads immediately, rather than waiting weeks or months for your site to get re-indexed.

Don't forget that keywords are what the client/customer types in to Google - they might not be the same names as you use in your business yourself.

Talked about K2 and MOSS, but I missed this session as I had to do some birthday present shopping. 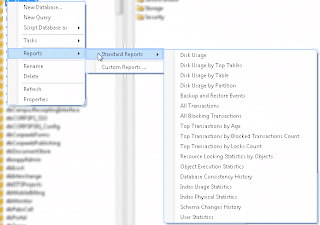 DMV's - dynamic management views in SQL 2005. These views were originally developed for the SQL Team at Microsoft to aid in their internal debugging and diagnostics. They live in the SYS schema.

Greg showed how you can use CROSS APPLY to run a TSQL function for each row of a result set.

There's also a new feature in SQL 2005 SP2 that let's you view reports of your databases (you don't need Reporting Services for this to work).

An overview of NHibernate (seems like there's a bit of an ORM theme this year). Greg asked a good question about dealing with concurrency. As an NHIbernate user myself, I'll have to research this a bit more.

Yes, it was ironic that James - self-confessed Database non-fan was sandwiched between the two Greg SQL gurus :-)

SQL Server execution plans explained. Greg really knows his stuff and it was very worthwhile to see this talk, which was similar to his presentation to the Adelaide SQL group last year.

A talk about how Readify manage all their staff who are out there developing remotely.

They use Scrum, but the stand-up daily meetings don't really work if you're not all in the same place, or if you're all working on separate things.

They really like WSS v3, and use SharedView to share documents and screen views (eg. do pair programming remotely)

A really good day - great to see lots of people turning up.

RJ has joined the Online Services team this week. As you can see, he's spent time on the Academic side of the fence - now he'll be seeing how the other half live as a 'Professional' staff member!

The University of South Australia participates in publishing it's staff expertise on ExpertGuide.com.au. It's a site that aggregates expertise from academic and professionals, and is obviously a great resource for journalists.

Because I'd presented some talks on Internet Safety for Children, I'd added this as an area of expertise, not really thinking about how this might be interpreted by other users of the site (eg. journalists).

I've realised now that this explains the phone call earlier this week, and again today from from a Sunday Mail journalist.

Consequently, I've updated my profile to more accurately reflect what I am an expert in.

Internet Safety for Children is an interest and a concern of mine, but I'm not an expert in that field.

LINQ for SQL at CodeCampSA

Just in case you didn't realise, I'm doing a talk on "LINQ for SQL" at this weekend's CodeCampSA. Yes, I'm the first "real" speaker after morning tea on Saturday!

I'll be doing an updated version of the presentation I did for the SQL User Group in February.

At that time, the latest LINQ for SQL was the May 2006 CTP which installed on top of Visual Studio 2005. Since then Microsoft have released Beta 1 of Visual Studio 2008 which has also incorporated some language syntax changes to Visual Basic related to the LINQ bits. Fabio has listed some of the framework changes since last year.

Bits that affected my presentation include:

I also did some testing of SQL generated for SQL Server 2000 versus 2005. It turns out LINQ for SQL is smart enough that it uses 2005 features (eg. ROW_NUMBER) when they will perform better.