If you're fortunate enough to have one of the Visual Studio Team editions, then you have the inbuilt Code Analysis tool that you can run.

Otherwise, you can use the free FxCop tool

But what if you're in a team with a mix of Team Edition and Professional (eg. no Code Analysis)?

Add the following to the bottom of your project files and FxCop will be run on Release builds if you don't have the inbuilt Code Analysis tool installed:

<!-- Run FxCop if available on Release builds, but not if we also have Team Developer -->

Microsoft have just released a whole lot of training "modules". I presume there'll be some kind of announcement or overview published shortly about them.

They seem to cover all kinds of topics related to development and developer practices.

"Agile project management is more than a software production method. It is a philosophy—a grassroots movement to change software development by valuing individuals and interactions over processes and tools. Developers who understand and embody agile project management techniques will make their organizations more efficient and themselves more valuable. This comprehensive introduction features seven team exercises that teach agile concepts and a downloadable white paper for further study. 85-screen PowerPoint with 7 subsections plus PDF white paper. 4 hours."

I logged into my Vista box tonight and got a nice surprise. A pleasant reminder that tonight the clocks wind back an hour! 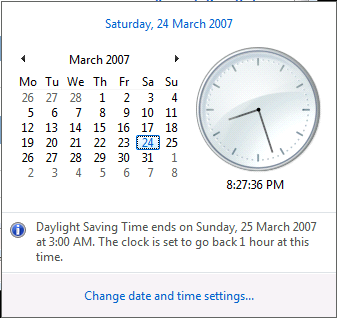 This appears to be the RTM of the extensions for Visual Studio 2005 that improve support for developing Web Parts, site and list definitions. It also includes the "SharePoint Solution Generator".