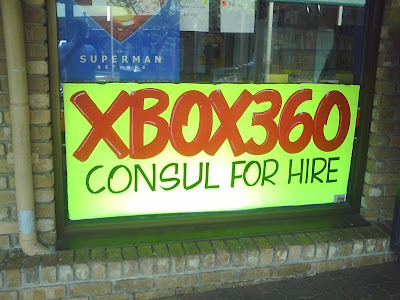 I saw this sign out the front of the local video shop a few weeks ago, and last weekend remembered to take a photo of it!. It’s a bit surprising, as I would have thought you would pick ‘console’ before ‘consul’ as the more well-known/spelled word. I suppose they do have those ‘alternate world’ games to which you might want to have diplomatic relations!

I’m back at work after two weeks leave over the Christmas/New Year’s break. Not too many emails to sort through, and not too many problems to fix so far.

It’s been the one big uncertainty about running Vista 64-bit - having to tread very carefully for the last month or two without that extra safety net.

I also got access to the RTM of Office 2007 Enterprise Edition just before I went on leave, so it’s nice to be running the release version of Office 2007 now.

You may recall that I was supposed to do this exam yesterday, but there was a problem with the exam workstation, so I had to reschedule to today. It was a bit tight, as Pearson VUE wouldn’t let me reschedule to next year as the voucher I used expires on 31st December.

It was reasonably tricky - a couple of the questions I just had to guess - particularly some of the stuff I don’t use much, but I felt reasonably confident about most of them.

Still, it was a big relief to get to the final screen to see “You have been successful” (or words to that effect). I wanted to shout “YAY”, but there were other people doing exams in the same room so I just did it silently instead :-)