Mads implements a HttpHandler to allow C# to be embedded in CSS files so your stylesheet can be customized.

Don't know much about this - looks a bit like it's ActiveSync for Vista.

I also got my replacement iPAQ today - with buttons that don't fall off, so we're off to a good start already :-)

Although I've been aware of Skype for quite a while, I've never had occasion to use it until now.

Our friend Jane was able to talk to her sister Ann who is now overseas, and it worked pretty well.

Not as seamless in my opinion as proper VoIP (like we use for our normal phonecalls at home), but it is still free so you can't complain about that. 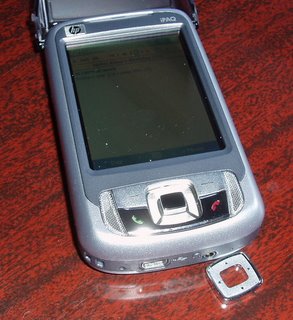 I decided to get the HP iPAQ rw6828. It arrived this week, but I'm wondering.... is it supposed to do this?

Then there's the debarcle that they didn't port my old number over to the new SIM that comes with this phone (my old phone is CDMA so didn't have a SIM).

It now looks like I'll end up with the new number on the SIM just in time to send the new phone back to be fixed. I do wonder if a drop of glue might be an easier solution.

I also noticed that Optus coverage around my house leaves a bit to be desired.

Apart from the falling off button, the technology itself looks good so far.

I've finally got the C10100E Central Splitter (from MATS Systems) installed, and I'm pleased to see that the new connection speed is a reasonable amount faster than previously recorded. This also means that I've been able to relocate the modem and VoIP hardware into the storeroom (instead of sitting on the kitchen bench!)
Previous Page: 156 of 198 Next