I've just had an interesting bug report for Aussie Toilets. The stack trace starts with this:

There's a small clue there, but the other big hint was the user's regional setting:

It turns out in a number of places I'd been assuming the default number format, particularly instances of Decimal.Parse(), Convert.ToDouble(), and the popular String.Format().

So if you're in France, you'd be used to seeing "123.49" written as "123,49". The bug in the application was that the data being read was originally formatted in the former, but with the user's regional settings set to 'French (France)' the parsing methods were assuming it would be formatted as the latter.

I've resolved the problem in this instance by explicitly specifying the InvariantCulture, as the data isn't displayed to the user. If it were intended for user display, then allowing the user's regional settings to influence the display would be quite appropriate.

FxCop (aka Visual Studio Code Analysis) will warn you about these kinds of issues, specifically CA1305 – Specify IFormatProvider. I've changed this warning (and a few others) to an error to ensure I don't get caught by it again.

When I first started working on Aussie Toilets, I was doing it from the perspective of a parent who has had first-hand experience trying to find a public toilet for a young child. I hadn't really considered another market for the app might be the overseas visitor. Maybe I should consider providing translations for some of the labels for these users too.

'Aussie Toilets' version 1.2 is now available in the Windows Phone marketplace. This is my Windows Phone 7 app that shows the nearest public toilets to your current location.

The latest release includes the April 2011 dataset, and significant performance improvements. Specifically, toilet locations should load almost instantly. So now if you're in a hurry to find the nearest public toilet, you'll be relieved (ha ha) to know you won't be kept waiting any longer than necessary.
I'm quite chuffed that 'Aussie Toilets' is currently sitting at no. 3 in the top selling apps of the 'Navigation' category in Zune. Not sure if this is just for Australia or global. So far I've had over 1,200 downloads, which isn't too bad at all.
PS. I have received a bug report from an Austrian user of Aussie Toilets – turns out I hadn't tested the app outside Australia! This may explain an issue I had with getting 1.2 passing the Marketplace requirements (as I assume the testing would be taking place in North America). So expect v1.3 very soon!

I know this because as you can see the in the photo below, I'm wearing a badge (made by my daughter) that says "40 years old" 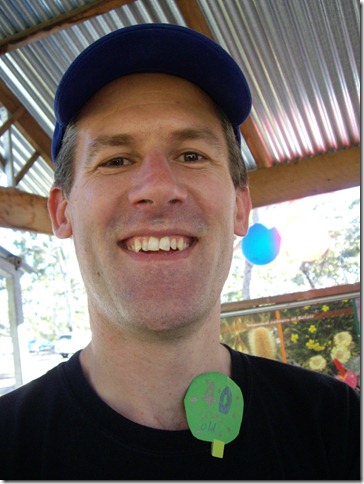 Yesterday I celebrated the occasion with family and friends at a picnic lunch in Belair National Park. The weather couldn't have been better and I think everyone really enjoyed themselves (I know I did).

Extra special thanks to my lovely wife Narelle who worked very hard to make it a fantastic day, Narelle's Mum & Dad for decorations, barbecue knowledge and other help, my Mum and Dad for having me in the first place

, my sister Fiona for putting together a wonderful birthday scrapbook, and my kids for helping with the games.

Since I've been using the Windows 7 Import Pictures and Videos wizard to upload photos from our digital camera, we've used the directory naming scheme of YYYY-MM-DD. Prior to this, I'd written my own custom photo importer in C++ as I didn't like the naming schemes that Windows XP offered. Unfortunately I'd chosen YYYYMMDD instead.

I'm now consolidating all our digital photos onto our Windows Home Server. This makes them easier to browse on the big screen using Windows Media Center, and has the added benefit that they also get backed up to the cloud via a subscription to CrashPlan.

I discovered the downside to having the different naming schemes when you go to view the photos in Media Center – it displays the folders out of order because they don't all follow the same format.

PowerShell to the rescue:

This finds directories matching the old naming scheme and renames them to conform to the new one.

My C++ importer imported all photos into a single folder, so to avoid overwriting the same folder if you imported twice on the same day, I would add a .0 (or .1 etc) to the end of the folder to ensure it was unique. There weren't too many of these though, so I dealt with them manually.

If you're a Windows Phone 7 developer, you may have come across Eqatec's Profiler. As far as I know, it's currently the only performance profiler that supports WP7 applications (Red Gate have indicated that they will support WP7 in 2011 Q4).

I've made use of Eqatec Profiler already, as there is a free version available, but with some restrictions (such as only profiling a single assembly).

Now in exchange for trialling their analytics product, they're offering upgrades to give you free licenses to the less-restricted versions.

I participated in the analytics evaluation and got 21 points which entitled me to a 'Professional' profiler license (normally $US399).

So what did I think of the analytics product? Well it seems quite solid, and didn't have any noticeable impact on my test apps. If you were selling software commercially then it might be of interest, but the price is prohibitive for those of us who have only released free software so far.