Upon returning from TechEd, I went to power up my trusty old workstation (an aging Intel D865PERL-based machine), however it didn’t start up at all. After double-checking that it was actually plugged in properly I suspected that the power supply may be the culprit.

I’d had a similar problem with the kid’s PC a while back. I’d bought a new replacement SHAW PSU and it worked for a time, but had subsequently started freezing for no reason, so it had been put aside.

I took the new PSU out of that PC and dropped it into my workstation. Turning on the power got an immediate response – fans whirring and all the right sounds coming from the machine. Everything looked good until the after the “Starting Windows” screen disappeared. After a long pause I was greeted by nasty BSOD:

I could boot the system in Safe mode, but as soon as I allowed it to reboot normally it would BSOD again. Windows 7 Action Center tries to be helpful and suggest I go to the NVidia website to download a new driver that fixes the problem. A nice idea except that the GeForce FX-based graphics card that this machine uses was last supported by driver version 96.85 from 17th October 2006 (which I was already using).

Researching this error I came across this thread. I tried the suggestion of adding the TdrLevel DWORD value to the registry but unfortunately the BSOD remained.

So the problem is somehow related to the graphics driver. Quite bizarre as I’ve never had problems like this before. The only thing that changed was the PSU. This made me suspect that maybe the new PSU was also problematic. That might well explain why the kid’s PC also froze for no reason too.

So what to do? Buy another (better quality?) PSU in the hope that it will resolve the BSOD, or go the full hog and upgrade this circa 2003 system with something a little more modern.

Back helping out in the Hands on Labs again this morning. A long shift from 8.15am – 1pm.

Somehow I missed getting to DEV424 – “High performance, highly scalable applications on the .NET Framework”, but instead I went to VOC208 – “Tech•Ed backstage 2010!”. It was interesting to hear the hurdles that were leapt to roll out the networking infrastructure (particularly wireless access and IPv6) at the conference this year.

At lunchtime I managed to see Carl and Richard and their “64-bit question” swag giveaway. Nice to see the guys in person, and put faces to the voices from the podcasts.

Regarding IPv6… Apparently it wasn’t particularly easy to roll out, and there’s not much on the Internet yet that works with it (eg. not even Windows Update), but on the other hand, they reckon IPv4 addresses are almost all exhausted, so the need for IPv6 to become more widely available is growing.

Good to see Rob made the highlight reel at the closing session! The “locknote” was presented by Miha Kralj. It was another use of fast-paced PowerPoint slides, but again done very effectively. Very thought-provoking.

First thing Thursday I was assisting in the Instructor-led Lab “Microsoft Visual Studio 2010: Office Programmability”. That went well. I ended up having to explain extension methods to a few of the attendees who hadn’t come across them yet. A good reminder that not everyone’s been using all the features of .NET 3.5.

After that I attended the following sessions:

Nick’s talk was good. Windows Phone 7 looks very nice. It was interesting to hear some of the restrictions and limits that need to be take into account to develop for Phone 7.

Nicholas just happens to be the author of AutoFac and also was a member of the MEF team at Microsoft, so he spoke with some experience about inversion of control. I felt it was a little disjointed, and seemed to jump from IoC101 to more advanced concepts a bit too quickly. Even so, I did like Nicholas’s relaxed presentation style. The room was packed too, showing there is demand for 400-level dev talks.

The BI talk wasn’t what I was expecting. It was actually about how Microsoft deployed a BI portal internally.

After the sessions it was time for the two labs that I was instructing/introducing:

They both went well and I really enjoyed running them. I should say special thanks to Mitch Denny and Anthony Borton who gave me some great resources and assistance preparing for the Test Manager talk.

Whilst the general hands-on labs are good, I liked the Instructor-led Labs the most as all the people in the room were there doing the same thing.

A quick visit back to the hotel room allowed Narelle and I to Skype the kids and grandparents. That was fantastic.

Then back to the convention centre for the “House Party”. I was a bit apprehensive as previous conferences when they’ve tried to do their own social night haven’t been that impressive (previous years at the Gold Coast, Movie World or Dreamworld have been the popular choice). But credit to the organisers, I think they managed to pull off a good evening. There were lots of spaces with different activities – food, full-size fussball, lazer skirmish in the underground carpark, comedians and entertainment in the main arena.

Wednesday started off early – that would be the sun rising at some unearthly hour. So much for sleeping in without the kids being around!

I caught these sessions:

I was hoping to see “ARC301 - Philosophy of Software Quality” but the room was packed to overflowing. Disappointing as Joel Pobar is always worth hearing.

Donald’s use of early 1900’s business process manual extracts and images just goes to show that the more things change the more they stay the same. I knew that there use to be people who’s job title was “computer”, but didn’t realise they had pivot tables (or close enough) back then.

Nicholas described some impressive stats for how some customers are using SQL Server and the kind of loads and performance that are possible. 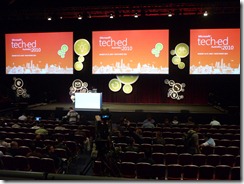 August picked up from where yesterday’s keynote left off. Some really interesting ideas and concepts. I’ll be hanging out to watch that one again when they publish it up at http://www.msteched.com/2010/Australia 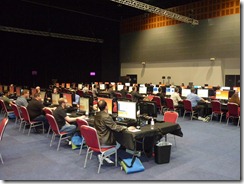 From 3.30 – 7pm I had my first shift helping out in the hands on labs. That went well, though your feet do get tired after standing up for all that time! 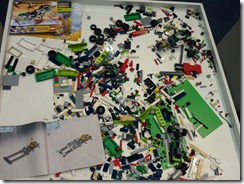 So that’s how they build software components!