Going to Tech-Ed as a Technical Learning Guide 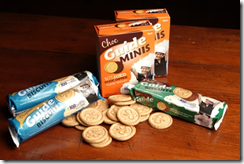 I received news yesterday that I've been selected to be a Technical Learning Guide (TLG) for the Hands-on-Labs and Instructor-Led Labs at TechEd Australia 2010 Conference on the Gold Coast in late August (I was eligible for this because I'm now an MCT).

Rob suggested that I apply, and I'm glad I took his advice! As a TLG I will be asked to do one or more of the following activities:

I'm really looking forward to this, and just in case you didn't make the connection about the picture – they're Girl Guide biscuits

For some reason I'd overlooked the fact that the instance of Team Foundation Server I was running on my Hyper-V server was still the release candidate instead of the RTM version.
Upgrading turns out to be relatively painless. I followed Johan's suggestions.
To backup the data-tier I fired up sqlcmd and ran the following:
I uninstalled just the TFS component, then ran setup.exe off of the RTM and after allowing the setup to proceed, chose the 'upgrade' option. It's nice to see that they ask you to confirm that you have done a backup before the upgrade can continue.
Coincidentally, like Johan I also had a problem with a TFS workspace being in use – though I believe this was because I changed the TFS Build process to run as a user account (previously it was using SYSTEM). I used a variation on the same command he used (different possibly because my servers are just in a workgroup rather than a domain).
Note that the TF.EXE command comes with the TFS client bits – I ran it from the machine I run Visual Studio 2010 on as my TFS server just has the server stuff.

I happened to be switching between channels the other night and went to enable subtitles for a particular program (a feature of MCE in Windows 7 that I've grown to really appreciate).

I was surprised to see an extra menu appearing - "Interactive TV". Wow, I wonder what it does? Nothing apparently but it is intruiging. I'm not sure if this is something new in MCE, or a new feature for the television transmission in my area. 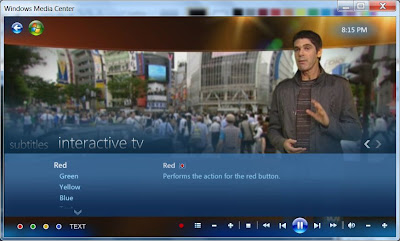 A reply to my query on the Australian Media Centre forums suggests this is a new feature that some channels are now transmitting.

Back in April I participated in three 'beta' exams for Microsoft:
Being 'beta' means that you get to do the exams for free (as they are using you to find any mistakes etc), but if you pass then it counts as passing the real exam.
These exams have just been publicly released, and I just found out I passed all three! As a result I can now add the following certifications to my list:
Microsoft Certified Technology Specialist
Microsoft Certified Professional Developer
Updated: Turns out I was incorrect, you do also need to complete 70-513 before you qualify for the MCPD Web Developer 4. This has now been clarified in the prerequisites for the certification.

Adelaide's own CodeCampSA is on July 24-25th this year, and all you have to do is follow these easy steps:

Once again, we're privileged to have speakers from both Adelaide and interstate – including LobsterPot Solutions' very own Rob Farley and some fellow named David Gardiner

If you've got any free time over that weekend and you're interested in learning new things about .NET, software development, SQL Server, SharePoint and other related things, I'd strongly recommend you try and get down to UniSA's City West Campus. I know I'm planning to be there for the whole weekend!

Finally, it's probably not too late to contact Peter Griffith if you've got the urge to present on a topic.