Our family has just returned from 4 very pleasant days holidaying on Kangaroo Island.

This is my fourth trip to KI. My first was as a Scout hiking from Cape Borda down the west coast. We also had a family holiday to KI (which I remember for the rest of the family being very seasick and me being very bored in Penneshaw waiting for them to recover!). The third (and most recent) trip was with a group drawn from various Adelaide Uniting Church congregations who went over to the island to participate in a church youth service. If I recall correctly that last trip was just after I first met Narelle so it’s been a few years.

We caught the 9am ferry from Cape Jervis. It was a little choppy but no one was seasick. We were staying at Vivonne Bay (Australia’s best beach according to some) in a really nice holiday rental property. Vivonne Bay may not have the facilities of Kingscote, but it is conveniently located on the island so that most attractions are within an easy drive.

Day 2 saw a trip to Flinders Chase National Park where we saw Cape De Coudic lighthouse and Admirals Arch (with lots of seals), Remarkable Rocks, and squeezed in an exhilarating 4km walk from Snake Lagoon (didn’t see any snakes) down to the Rocky River mouth.

Day 3 we headed up to Stokes Bay on the north coast of the island. The beach where you park is deceptively disappointing (just lots of rocks) but if you follow the signs through the rock tunnel you make your way to a lovely sandy beach just around the corner. Speaking of sand, we then headed off to the Little Sahara sand dunes for a shot of sandboarding. Lots of fun, but exhausting having to climb back up the hill each time!

Day 4 we checked out some of the local honey at Clifford’s Honey Farm, including yummy honey icecreams. Then over to Kingscote to check out some of the historical sites at Reeves Point (the location of South Australia’s first European settlement in 1836). Plenty of time to catch the 4.30pm ferry back to Cape Jervis again and then the drive back home.

I can remember a few years back when I’d been seemingly working non-stop for an extended period and all I wanted to do was sit on a beach for an hour and listen to the waves. While that was effective, I think it is far better to take a pre-emptive break from the daily routine. Our trip to KI was just that (also because there’s only Telstra 3G coverage on the island I left the laptop at home so 4 days of no computer too!)

One odd thing – I never actually saw a live Kangaroo this trip – just dead ones that had come off second best against road traffic.

There’s also more sealed roads now than I remember from previous trips. You can get all the way to the south-west coast without leaving the asphalt, but there’s still plenty of corrugated dirt roads (the short track to Little Sahara was probably the bumpiest).

One of the talks I did manage to see at TechEd this year was the one about how they managed the network infrastructure for the conference. Part of the presentation when into a bit of detail about how they went about providing IPv6 connectivity including arranging the backhaul from the convention centre back to the Internet.

I wasn’t surprised when they mentioned they used Internode as part of the solution, as I’ve seen the Internode guys talking on Whirlpool about IPv6 for a while now.

The things I remember coming away from the presentation were that:

The hardware is certainly an issue, so it’s good to see that the manufacturers are starting to release entry-level devices that support IPv6. Internode announced today that they’re now selling the NetComm NB6Plus4 which supports IPv4 and IPv6 in “dual-stack mode”. Billion also have their 7800NL router which operates similarly.

I didn’t knowingly use the IPv6 network at TechEd but the comments from those who did were that it was also surprising how few websites were available – even Microsoft Update didn’t work.

A lot of problems still to be solved - interesting times ahead!

Conditional text in Excel when a range has a value

Unusually busy on the Excel helpdesk today – Jane’s follow-up question was how to do the same thing with a range of cells. eg. 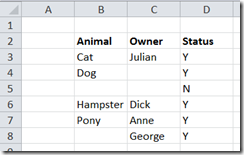 My initial suggestion was to use COUNTIF(range, criteria) where the criteria is “*”, but it turns out there’s a better answer – COUNTA(range) which counts the number of cells in the range with are non-empty. So the formula becomes:

If you wanted to do the inverse and only return “Y” if all values in the range are blank, then COUNTBLANK(range) will do the job. Also check out KB 274537 for details on some scenarios when COUNTBLANK doesn’t work so well.

Conditional text in Excel when a cell has a value

This might seem trivial to us ‘developer’ types, but it was today’s “Jane’s Excel question”.

You have one or more cells in a spread sheet. You want to display some text “Y” or “N” depending on whether the cell has anything in it. eg.

One solution is to use this formula:

This checks the length of the text in the cell. An empty cell will have a length of zero. Anything greater than zero means the cell has something in it.

It’s nice to live on the cutting edge – using the latest version of everything, especially web browsers. But sometimes you may have to support users running older versions, and it is a lot easier to support a user if you can be using the same software that they have in front of them.

The problem is that you can normally only have one version of IE installed in Windows. Roger showed me IE Tester which looks quite impressive. It works by hosting separate version-specific instances of the IE rendering engine. Probably a good option if you’re a web developer.

If you have access to Microsoft’s Expression Web, then Expression Web SuperPreview offers similar functionality. Another option is to utilise the free virtual machines provided by Microsoft. These are complete standalone copies of Windows XP and Vista with versions of IE6, 7 and 8. To run these, you need either Virtual PC 2007, Windows Virtual PC (Windows 7 Pro or Ultimate only) or Hyper-V.

If you’re using Virtual PC 2007, one nice thing you can do is add a desktop shortcut to the VMs so they can be launched easily:

Ryan Adams has posted a comprehensive list of all the available command-line options.

One thing to note – the VMs do have an expiry date. Updated VMs are usually made available before then though.