It’s been a big Christmas season in the Gardiner family this year. Last week we dressed up as New Testament-era characters in Aberfoyle Uniting’s re-creation of Bethlehem in “The Road to Christmas”. Thursday evening Narelle and I joined some friends for carol singing at a local hospital, then Christmas Eve we attended church as a family. It was a good service, and included this thought-provoking modern-day take on what Mary and Joseph went through: 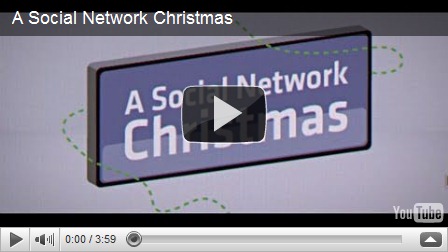 On Christmas day we were hosting immediate family at our place for lunch, and were then joined by some extra friends for tea. Narelle had a thought a few weeks back that to cater for this many people, a second fridge would be useful. After checking out some second-hand stores, I ended up bidding (and winning) one on eBay.

It has been a great fridge. It fitted all we needed to fit in it, and saved all those minutes of “angst” when trying to fit the leftovers in it after lunch and tea. I must say that Narelle did an amazing job – the meat and vegies were perfectly cooked…and the pudding was out of this world.

(Narelle added the above two paragraphs while I was playing Kinect) But I agree, the fridge was a great idea. The day started at not an unreasonable time. We’d been to Church the previous evening, so things weren’t so rushed in the morning. The XBox 360 + Kinect has proved a big success. Our family present this year, and all the family has been having a go - even our youngest (though sometimes to the frustration of other players!) – she can play some of the games, though some of the finer controls are too tricky for her yet. We’ve had a lot of fun playing:

(Kinectimals and Kinect Joy Ride were presents, the other two titles came with the bundle). So far I’m totally impressed. The only thing I could wish for would be some family-friendly titles to be published that can have more than two players at one time (I’ve heard Kinect can track up to 6 people, though I think you’d need lots of space for that).

One of my other favourite presents had me up far later than I should have been Christmas night. I was only thinking the other day when we were watching “A Muppet Christmas Carol” that one of the best things to ever come out of the USA is Jim Henson’s Muppets. That thought was reinforced by me getting a copy of Sesame Street: A Celebration of 40 Years of Life on the Street. A fascinating read so far.