This creates new tiff files for each JPEG file. The only problem is that MODI doesn’t like the particular flavour of TIFF generated. Fortunately ImageMagick has 1001 options to configure exactly what you want to happen.

A bit of experimentation and I’ve found that the following extra options generate TIFF files that can be read without problems:

All good, except that I then discovered that the scanning was at such a low DPI that the OCR wasn’t able to find any text :-( I’m not sure what happened. It was time to leave work, so I un-cradled my HTC TyTN II phone. I noticed it was part-way through synching but that shouldn’t matter.

I did a soft-reset, and after it restarted it got as far as saying it couldn’t do a network connection (not sure why it was trying to do that), and then it would refuse to do anything else.

Further soft-resets didn’t help either. Narelle tried to ring me, but I couldn’t even answer her call, as none of the buttons had any effect, and the only way I could stop it ringing was to soft-reset it again.

That seems to have done the trick, though it does mean I’ll have to re-install everything else again. 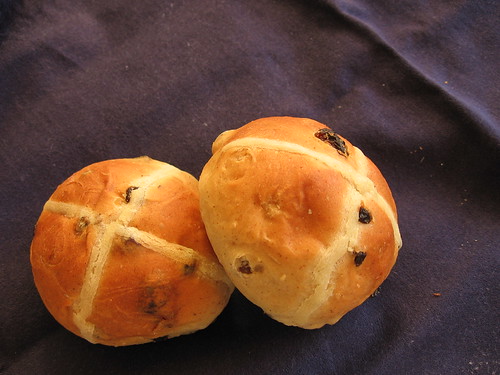 Here’s something a bit different!

We’re having a few people over for Hot Cross Buns on Good Friday. If you know me, then you are welcome to join us. Just drop me an email and I’ll forward you the details.

I’d been thinking over the weekend that it would be polite to contact Paul Sherlock - the Director of UniSA’s ISTS to let him know that I’m not planning to move over to their new Learning and Teaching Systems team. However, he beat me to it! He rang to ask if he could drop by and have a chat. Paul has always been friendly and cordial when I’ve had anything to do with him previously, and today was no different.

I told him that I was planning to leave UniSA, and not move out to the new position at Mawson Lakes. I’ve already mentioned here previously that the way I see ISTS function is not a place that I see myself fitting into.

Handover won’t be easy, as the new team doesn’t exist yet, and I’d guess it would be at least another month by the time they advertise and fill the other positions. The best I can do is try and get RJ up to speed on as many things as I can think of (as he’s indicated interest in the new team), and maybe make use of that nice Wiki software we now have.

It isn’t easy picking up other people’s work. I experienced this first hand when Roger left our team last year. Picking up after me will be harder, as I’ve got 13 years of “legacy” applications behind me :-)

The meeting ended positively, with Paul wishing me well for the future. I appreciate that. You never know when your paths will cross again, so I think it’s preferable to leave on good terms.