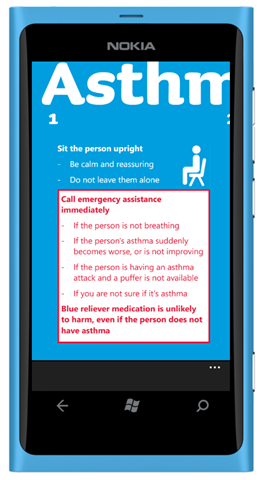 Asthma First Aid is a free app I've developed in conjunction with Asthma Australia. It informs you of the recommended first aid steps for someone experiencing an asthma attack.

I think continuous learning is an integral part of being a professional. On the 24th April 2012, there's an opportunity for everyone with an interest in SQL Server to further their knowledge at the first SQLSaturday event to be held in Adelaide – SQLSaturday #139 (even though it's on a Tuesday!)

So run (don't walk) to the registration page and sign up today. Then go and let your manager/boss/social secretary know where you'll be on the 24th!

Last month I decided to take the plunge and switch over to a Naked ADSL service. Late last year Internode had announced that they'd sorted out number porting for customers on existing ADSL2+ connections (like myself). More recently they also introduced a new tier in their Naked plans, so that leaving my old 50G ADSL2+ plan was now viable.

The switch to a naked line happened on the scheduled day. I didn't realise however that the porting of the phone number would take a few extra days. Not a huge problem, but something to be aware of.

Going naked means you have no dial-tone. If you want to keep your phone number, it needs to be ported to a VoIP service. In this case to NodePhone (Internode's VoIP offering), with $10/month call credit. I've been using first FreeCall and more recently PennyTel as outgoing VoIP providers for a number of years. It will be interesting to see how NodePhone compares.

I configured my trusty ATA (a Sipura SPA-3000) with new settings to work with NodePhone. All seemed fine, but it didn't work – the registration was failing. A call to Internode Support didn't identify any issues other than I was using more recent firmware than they were aware of, and that I was using relatively 'old' hardware. In any case just when I was about to give up for the evening, I noticed that it had started working all by itself.

It turns out I bought the Sipura SPA-3000 way back in 2005. 7 years is a good innings for consumer hardware, so maybe it was time to update to something more current. The Gigaset C610 seemed to be well regarded so I picked up one from Internode's Adelaide office.

It was pretty straightforward to configure, but annoyingly I then discovered I was having the same problem still. Another call to Internode Support, but this time they said they had TWO active registrations – one for the Gigaset and one for the SPA! That didn't make sense, as the SPA was now sitting on a shelf – no power, no network. They reviewed the modem and Gigaset settings and things seemed to settle down, and I received an incoming call ok.

So hopefully that's the way things will stay for now on

Part 3 of a series on developing .NET clients for Yammer.
For the Windows Phone version of MetroYam, I'm again making use of RestSharp to handle the REST API work. Once difference when using RestSharp on Windows Phone compared to the desktop is that it only exposes asynchronous methods.
So instead of calling Execute, we have to call the ExecuteAsync method. Here's the equivalent code:
Rather than a single method that returns the list of messages, we now have a class that populates an ObservableCollection. A reference to this is passed in via the constructor. The ViewModel page that calls this code is straight forward:
Through the magic of Caliburn Micro, the public properties exposed by this ViewModel class are automatically bound to the View. In this case we are using a simple Panorama-based Windows Phone application template. The result is an application that looks like this: 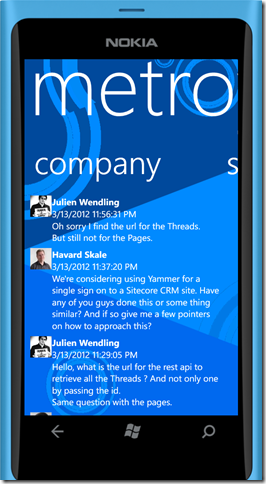 It would be nice leverage the Reactive Extensions (Rx) library to simplify access to the ExecuteAsync method, but because this method doesn't just return an IAsyncResult this is a little more involved. Sergy posted to the RestSharp group an example last year, but I assume the RestSharp and Rx libraries have changed since then as his code no longer compiles for me.

Turns out I had a <Target /> with a DependsOnTarget attribute which referenced a target that didn’t exist (because I’d forgotten to <Import /> the related .targets file in which it was defined!)