There I was about to enjoy a nice sleep-in on the first day of my holidays on Monday when the doorbell rang. It was a courier delivering a nice thankyou present from Microsoft for helping test out and provide feedback on Visual Studio 2012.

Opening up this large box revealed a smaller gift inside

It’s a shiny glass cube with writing etched in the middle of it..

And it turns out this is a nice match to a similar present I received a few years ago for testing Visual Studio 2008 (which means I must have missed out 2010). The 2012 version is an identical size, but has one corner bevelled off so it can sit on that corner. The new cube also has the latest rendition of the Visual Studio logo.

Putting them together, yes they are the same size!

I know that it's Christmas..

Because people will even dance to some guy trying to play the ‘cello.. 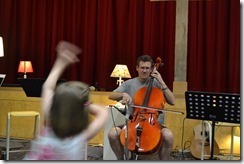 This year we visited our friends across town who were organising a Christmas Eve service at Playford Uniting. I was also able to be part of their band playing a few Christmas carols.

Because the Road to Christmas is on again..

And even made the Channel Seven news. Over the 3 evenings that this runs there’s probably a few thousand people from the local community (and beyond) that come and experience sights, sounds, smells and tastes of Bethlehem. It’s a great atmosphere and lots of fun too.

Because the cactus that flowers at Christmas is in flower.. 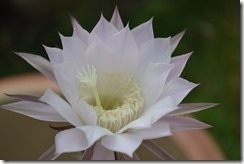 and the flowers came out first in the morning on Christmas day this year too.

Because the table is set for Christmas lunch.. 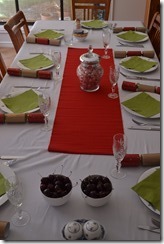 Because Narelle cooked up a storm..

Because the pudding is ready..

Because Mum & Dad gave me a new Super Soaker!

So it turns out that the CFS actually recommend having one of these around the house. If you did have a bushfire go through then then a key thing is to put out any spotfires in gutters or roof spaces once the main fire front has passed. They reckon a super soaker is good as you can pop your head up through the manhole into the ceiling and squirt any smouldering embers that might have found their way inside.

The other benefit is that it means I can now compete with my son’s soaker he got as a LobsterPot Christmas present a couple of years ago (thanks Rob!)

Because it is a chance to take a breath..

Borrowing from the theme of Pete’s message at the Christmas Eve service. After a busy and in many ways difficult year this year it is good to have a couple of weeks off and take a breath (or two).

Time to spend with family. Time to sleep in (maybe). Time to do a bit of riding in preparation for the Tour Down Under in a few weeks. Time to reflect on the year that was and the year that is to come. Time to appreciate the extraordinary gift that is the real reason for celebrating Christmas.

Following on from my investigations into services that summarise DMARC reports, I’ve come to the conclusion that the reason for the warnings about email from hotmail.com is because even though the account on hotmail is configured to send as @gardiner.net.au, it still is sending the email officially using the @hotmail.com sender address.

While it passes the SPF rule (that permits the hotmail email servers to send @gardiner.net.au emails), this explains why DMARC warns that the email is “unaligned” – eg. the email says it’s from @hotmail.com instead of @gardiner.net.au.

The problem is that while Hotmail does support adding additional email accounts, it only lets you configure ability to pull emails (via POP3) – you can’t enter a SMTP server to send emails. Sent emails always go out via the Hotmail SMTP servers.

One solution might be to migrate the Hotmail user over to GMail and configure GMail to pull their @hotmail.com email instead (and unlike Hotmail, GMail can be configured to use a different SMTP server for addtional email accounts).

But just as I was considering this option, I came across the news that Google is discontinuing support for Exchange ActiveSync! Why does this matter? Well as a Windows Phone user this has the potential to be a show stopper. ActiveSync is the protocol used to sync my GMail, Contacts and Calendar between my phone and Google. Whilst it does say that existing configured devices will continue to function, too bad if I change phones in the future.

So another option might be to switch my domain’s email over to Hotmail instead of staying with GMail, unless Microsoft can release updates for Windows Phone that restore compatibility with GMail after January 31st.

Last Thursday, I took advantage of the promotion that Microsoft is running (until 31st March 2013) to give everyone a chance to take the 70-480 Programming in HTML5 with JavaScript and CSS3 exam for free, and was pleased to find that I passed (scoring 860).

Completing this means I now gain the following certifications:

As an MCT, it also means I could now teach courses in those areas too.

It is nice to pick up the MCSD. This is the replacement for what was previously the MCPD certification. I had qualified for “ASP.NET Developer 3.5”, but never got around to completing the .NET 4.0 version (due to not having taken the WCF exam).

A while back I added a DMARC entry in DNS for my @gardiner.net.au domain. The existence of this entry then means I get daily email reports which include data from a number of email servers (eg. Google, Yahoo) about emails received from my domain and whether they were regarded as legitimate or spam. I don’t receive copies of the emails themselves – just a summary of how many emails the destination site thought were legitimate and how many were rejected because they thought they were spam.

Microsoft have just announced that they too are now sending DMARC reports, so this prompted me to review my current SPF and DMARC settings to ensure that they’re working properly.

The trouble with the DMARC reports are that they come via email with an attached zipped .XML file, which means you can’t just view them… you have to download them, unzip them, then open it in IE (or Notepad), and scan through the XML to try and make sense of it. Wouldn’t it be nice if there was a tool or service that summarised this for you?

Well it turns out there are some. I’ve decided try try two out - http://dmarcian.com and DMARC Analyzer.

Both of these services allow you to upload existing DMARC reports or set up email forwarding to automatically send the reports directly. You can then log in and view a summary.

I uploaded the data from the last 7 days. Here’s some examples of the kind of report you get from each service:

The details for data from the 9th of December:

I was curious that both of them flagged a potential problem with an email. Sometimes this can be because it is actually spam – an email sent from an address that was not part of the authorised sender list as defined in the SPF record. But in this case, the error indicated that the email did come from a legitimate source.

Next step to confirm that my SPF record is correct. A quick trip to the SPF Record Testing Tools confirmed that yes, my SPF record was in effect, but that there was also an error message I hadn’t noticed previously:

So it turns out that there are limits on how many DNS lookups are allowed for SPF records. 10 to be precise.

My old SFP record was:

It does looks like there’s some redundancy there with two similar includes covering GMail and another two for Hotmail/Live. Simplifying things down (and hopefully not losing any accuracy) I’ve changed the record to this:

This now passes validation. Note that I’ve reverted back to ~all (a ‘Soft’ fail which means that recipients won’t outright reject emails if there is a problem with the new rule). I’ll switch back to -all (a ‘hard’ fail) after a week or two once I’m happy that nothing is broken!

I’ll also be interested to see if the DMARC reports contain passing results for the hotmail emails.