Usually the meetings are at lunchtime, but the group were asked to move to the evening timeslot this month (something about a Windows Phone 7 series talk). The other difference was that we got KFC supplied for supper.

Adam stepped through the features of PerformancePoint 2010 and showed some of the new additions. Probably the most significant is that it ceases to be a separate (expensive) product and now will ship as part of SharePoint Server 2010.

It was an entertaining evening, with a lively discussion between Adam and the audience. At the end of the night I think it’s fair to say we’d all learned a lot (even Adam!)

How do you combine exercise, family and consulting work?

I’m trying to figure out how I can squeeze in the occasional ride to work, whilst still retaining that degree of separation that is appropriate as a consultant (eg. not using client’s shower facilities!)

My requirements are relatively simple. Somewhere to:

Rob had a good suggestion of checking out local gyms in the Adelaide CBD – maybe they might offer a cheap “change facilities only” membership deal. I read that Melbourne now have a dedicated “Bike Pod” for their cyclists to use. Wouldn’t it be great if Adelaide had something similar!

I’d be interested to hear of other suggestions and/or solutions.

Whilst I do like the idea of a “LobsterPot Solutions” branded bike top and knicks (the red claw would be very eye catching!) I’m not sure that our clients would be happy with me wearing that around the office all day :-)

I’m part-way through my 3rd week at LobsterPot Solutions and one of the things Rob asked me to do was keep track of my time, so that he can bill clients appropriately. That’s how things work in the consulting business :-)

Some people do this with the old fashioned but very reliable paper and pen. I tried that myself for a bit, but found a) my handwriting isn’t easy for even me to read and b) I wasn’t that good at consistently writing down new tasks etc.

One interesting approach I have seen is to just block out time in your calendar (be it Outlook or Google). That works as a record, but it doesn’t do the ‘adding up’ bit to give you the end of week totals etc.

Surely there must be a reasonable time tracking application that is free and does enough for me to record what I’m doing and give a reasonable I can forward to Rob? One criteria was that it should store data centrally. Being a consultant I could find myself working at a client’s premises in town, at home, or even interstate – so a ‘cloud’ solution is appealing.

The first application I tried was Activity Tracker Plus. It is a Google gadget that you can add to your iGoogle page and cleverly stores data in a Google Docs spreadsheet. I used this for a week and a bit, but found the editing and reporting were a bit limited. Specifically there isn’t a way to edit a previously saved time period, and it just gives you a weekly report but no totals broken down by activity. To top it off when I was trying to correct the time allocated to a task it was messing up the end-time component (a bug I presume).

I’ve seen RescueTime used by Ben and I think he found it useful. The free version does have limits though, including keeping only the last 3 months worth of data.

Because of that I thought I’d try SlimTimer. This is a simple web-based app that seems to have enough features to make it useable. I’ve only just started using it, so it will be interesting to see if it lives up to expectations. If not then I’ll give RescueTime a go.

Now that my WHS installation is running properly I’m a bit happier because it means I now have a current backup of all of our other computers. That’s a good start, but it doesn’t solve the problem of having an off-site backup.

One option is to buy one (or more) external drives – backup the WHS data to the external drive and then transport that drive to a trusted external location. That’s fine, but it would rely on me being disciplined enough to update it at regular intervals – and I’m not sure that I trust myself to remember to do that frequently enough!

The other option is to use the ‘cloud’ - subscribe to an online backup solution. Googling “WHS Backup” doesn’t list that many useful results. The top result is a relevant question on SuperUser. Scanning the answers reveals two products that apparently DO work with WHS, and a number of products to avoid because they don’t.

KeepVault provide online backup for Windows desktops and Windows Home Server. Their WHS product also includes a ‘client connector’ so you can also backup files from client PC’s too.

So how do the numbers stack up? The comparison is simpler once you get to 200GB and beyond. To simplify things, I’ve used US dollars and excluded KeepVault’s PayPal discount.

Throwing the numbers into a graph illustrates this nicely. For amounts of data below 200GB, Humyo looks ok, but once you pass that mark KeepVault appears to be the best value. 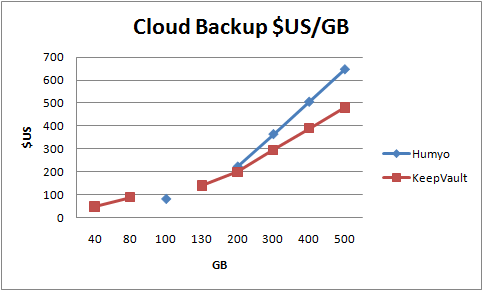 I can only see our backup requirements increasing, so at this stage I’m planning to sign up with KeepVault.

I think my Hyper-V server is finally behaving itself. In searching for a resolution to the intermittent BSOD, I finally found something that seemed to match my particular combination of hardware and software. I’ve installed the hotfix for Windows Server 2008 R2 that works around this “erratum” in Intel’s Core i7 processors, and so far so good.

The other reason Hyper-V has to be happy is that I also purchased a proper case to house the hardware in. I ended up getting an Antec Three Hundred case from MATS Systems. It’s a nice, smart, functional case. While there are cheaper cases around, Mark from MATS recommended the Antec models in particular because of their cooling ability. The Three Hundred (the model, not the price!) comes with two fans, and has decent capacity for mounting a few hard disks too.

Let’s see what a difference a proper case with extra fans makes:

That’s quite a significant drop. Those temperatures seem much more reasonable too.