(I wrote this post on 10th December, but was waiting for Open Live Writer to support Blogger)

So this happened.. Last week I reset my phone so that Narelle could use it for a day (hers had broken the previous day). Once I replaced hers and got my handset back, I reset it again and started re-installing all my apps. Windows Phone may not be the most popular phones around, but one of the nice things about them is that they do automatic backups, and by default save all your contacts to the cloud, so there isn’t much you can accidentally lose.

So after reinstalling everything I thought “hmm.. Maybe I should try out the Windows 10 update”. I’d resisted this urge previously as I’d read lots of reports of how unstable it was, but now the new 950/950XL handsets are out which come with Windows 10, and there’s just been an additional update since then too. Worst case I can use the support tool to reset my phone back to Windows Phone 8.1 again.

The install took a little while (maybe an hour?).

I did notice the battery seemed to run down a bit on the first day – admittedly that day included the update which would have used a bit of juice.

The trouble is it’s hard to know if that is just Windows 10, or my handset – I’ve seen it occasionally do similar things with 8.1.

Windows 10 Mobile looks quite nice. The upgrade kept my icons on the start screen, though the layout needed tweaking as the size of the icons seemed to have changed slightly.

Some of the apps are updated (eg. News, Mail, Calendar). Actually I think I prefer the 8.1 News app, but the new one is ok. I have two mail accounts on my phone, and they ended up being combined. Not sure if there’s a way to un-combine them.

Some minuses – possibly due to my older handset – I find the response time for various things quite slow. Even just turning the phone on and unlocking has a noticeable delay. The opposite is true of scrolling. It seems a bit too sensitive, and I often end up scrolling way further than I intended.

I’m going to stick with it for a little while and see how I go. If the battery does prove to be a problem then reverting back to 8.1 might be the best option.

I installed Update 1 for Visual Studio 2015 this morning and then upon reopening an existing solution I noticed some new warnings/errors listed in the Error List panel:

The problem was that warning didn’t appear before the update, and inspecting the code revealed that in fact that class did implement IDisposable and did dispose the field in question. What’s going on here – surely this isn’t a bug in Update 1?

That was my original thought, but then I remembered that this project references the Microsoft.CodeAnalysis.FxCopAnalyzers Code Analyzer NuGet package. I wonder if that package needs an update?

Let’s fire up the NuGet Package Manager and make use of the new ‘Updates’ tab to find out.. 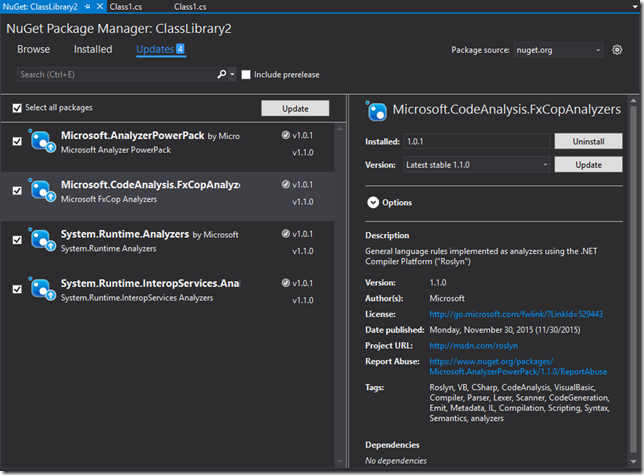 Yes, there are! A quick check of the Select all packages checkbox and click on the Update button, and tada – no more warnings

The band I play in (Sevenfold) uses Dropbox to share recordings and song words between band members. We ended up maxing out Dropbox’s free level, so I needed to consolidate some of the files. I found a bunch of .wav files that would save a bit of space if they were converted down to .mp3.

FFmpeg is a cross-platform tool for manipulating MPEG audio and video files. I’d previously installed it as part of supporting MP3 with Audacity by installing FFmpeg v2.2.2. If you don’t use Audacity then you could probably install the latest version instead.

PowerShell is a nice choice to enumerate through the .wav files. It also lets me reset the file LastWriteTime (Modified) so the new files look similar to the old ones.

Microsoft have just held their second Connect(); virtual event with quite a few product announcements. If you didn’t get up in the middle of the night to watch it live, you can see all the videos from the event on Channel 9. Here’s my personal highlights:

VS Code has now reached ‘beta’, which includes support for extensions. VS Code is now being developed in a public repo on GitHub.

The rewrite of ASP.NET build to run on .NET Core is getting closer to final release. Some nice new tooling additions (Bower support), and early support for “.NET Platform Standard” as a way of indicating binary compatibility between packages.

The rewrite of Entity Framework that runs on .NET Core (as well as full .NET Framework etc). Consider using it only if you don’t need features that it doesn’t have (kind of obvious advice really!)

The re-architected version of the ASP.NET diagnostics dashboard that (for the moment) runs only on ASP.NET 5. If you’re (like most people) still using earlier versions of ASP.NET then stick with Glimpse v1 for now.

Due out on November 30th (so no link yet)

Pretty sure this wasn’t a Connect() announcement but is just as interesting. Windows Server 2016 Technical Preview 4 is now available, which includes support for Hyper-V Containers (a more isolated container technology than the lighter-weight Windows Server Containers that were introduced in preview 3).

Friday was another chance to do some final sight-seeing back in down-town Seattle. I went on the Seattle Underground Tour, which was fantastic. A hilarious and entertaining tour guide made for a very enjoyable and educational history tour of the beginnings of the town of Seattle.

I also managed to get back for another look at the Pike Place Markets, which I’d briefly seen the previous Sunday, though Friday’s weather was an improvement. It was nice to look around and having something yummy for lunch whilst the sun poked through the clouds.

On the recommendation of Scott Hanselman I saw (but tried to avoid smelling!) the ‘great wall of gum’. Good timing, as a week later they started cleaning it all off for the first time in 20 years.

I was a bit concerned about the relatively short time to make my connecting flight to Sydney, but I need not have worried. San Francisco airport is relatively small (possibly similar size to Adelaide), so it was literally a 5 minute walk from gate to gate. What a relief – and much less stressful than going through Los Angeles again.

The flight back to Sydney went well (there’s something about flying overnight that makes it easier to go to sleep, or maybe I was just exhausted after a full on fortnight!)

Landing in Sydney early Sunday morning I managed to get on an earlier flight back to Adelaide than I’d originally booked. It was so great to get home and see my family again